"Mothers are on the forefront of a new security paradigm," Edit Schlaffer says, but our strategies of countering violent extremism "neglect those who are directly involved". For the founder and chairperson of Women without Borders, leaving them alone to cope with growing extremism "is not only a lost opportunity, it is playing with a ticking time bomb."

Edit Schlaffer attends the UNESCO Conference on "Internet and the Radicalization of Youth", held in Québec (Canada) from 30 October to 1 November 2016, whose main goal is to share best practices for preventing radicalization leading to violence. She shared her thoughts with Wide Angle.

After the 11 September 2001 attacks on the United States, the 7 July 2005 London bombings, the November 2008 attacks in Mumbai, the October 2002 Bali bombings, the March 2004 Madrid attack, countless attacks across Pakistan and the Middle East, we as a global society are questioning defense mechanisms, and we arrive at the realization that this is now very much about how we decide to live together, how we look at each other, how we negotiate. A lot is at stake, and women at the heart of the family and communities, are struggling to raise and guide their children amidst the turmoil.

We learned this traveling from Pakistan to Bali meeting women who were concerned that in the aftermath of these attacks, their children would make the wrong choices. One mother for example, whose husband lost his life in the Bali bombings, is now dealing with the consequences for her son. In our conversation she explained how desperate she felt; and she struggled with guiding him away from feelings of revenge. He told her over and over again, “I want to kill the people who did this to my father.” But later he decided not to become a terrorist, but a policeman. This shows how conflicted these youngsters are and how instrumental the mother’s strength and voice of reason is to channel these emotions in a productive way.

Mothers of terrorists speak the language of security

On the other side, are the mothers of the perpetrators. One such mother and a close partner of ours is Aicha el-Wafi, the mother of Zacarias Moussaoui, charged with involvement in plotting 9/11. She sent a message to the families of the victims apologizing for what her son had planned to do. She told me, “I tried to show my son the path of respect and tolerance.” She struggled to see where she had gone wrong.

Another woman, a Palestinian mother of a suicide bomber told me that when her son’s shrouded body was delivered to her home she refused to celebrate his martyrdom as was expected of her.

These women demystify the image we have of a mother of a terrorist. They would do anything to protect their children and prevent them from causing these atrocities. These women with whom I’ve worked over the years not only tell me their personal stories - their emotional struggles with their individual traumas -, but they already speak the language of security. After many of these conversations with mothers across the globe, I realized that they are on the forefront of a new security paradigm. They need to be the building blocks for a bottom-up security approach.

This realization encouraged me to investigate further. I wanted to understand how deep the prevention potential of mothers actually went. In a five-country study with over 1000 concerned mothers in volatile communities, we explored the question: Do mothers think they have a role to play in preventing violent extremism on the homefront? The findings shed light on the unique insights of mothers on the process of radicalization. Answering the central questions: what are the key influences, whom do they trust, and what do they need? Mothers are aware and eager to become constructive security stakeholders in their families, but they feel isolated and stigmatized. 1000 voices, almost in unison, said we need a platform, we need to relate to each other, we need more self-confidence to be aware of the role we can play. And we need a skill set.

So the MotherSchools Model was born: the first family-centered prevention and de-radicalization platform that seeks out mothers as an embedded security ally and arms them with the skills to be effective as the foundation of resilience in their communities. The MotherSchools curriculum has been designed to strengthen individual capability, emotional literacy, and awareness of extremist influences to both empower and enable mothers to effectively prevent and confront this growing threat. The Model was implemented across Kashmir, Pakistan, Indonesia, India, Tajikistan, Nigeria and Zanzibar and with the foreign fighter challenge has travelled now to Austria, Belgium, England, Germany and Macedonia. So far hundreds of concerned mothers have been trained to recognize and respond to the early warning signs of radicalization.

Mothers are a new knowledge base: they have unique access to the motivations, aspirations, and doubts of adolescents and young adults who are targeted online and offline by those trying to destabilize the world by using radical messages, manipulating their young minds, planting extremist religious and political ideologies into their young brains and hearts, a rapidly increasing phenomenon as we’ve seen over the past year. There is a certain acronym that represents this movement: ISIS. A few years ago no one knew what it meant. But now thousands of foreign fighters have flocked to Syria to support the cause, leaving families behind struggling with grief and guilt.

Fundamentalist recruiters draw in young people in search of identity, belonging, and meaning with promises of paradise. Indeed IS offers everything: jobs, esteem, and camaraderie— and beyond that they appeal to Robin Hood fantasies.

ISIS is recruiting on a daily basis and people are moving directly from their computer screens to the battlefield, either travelling to Syria or acting as lone wolfs on their home territory.

Terrorism is the new reality on the same level as air pollution, climate change and financial decline. Even in peaceful Austria, two teenage girls embarked on a journey to Syria to become brides of fighters. Their two mothers are heartbroken, both established middle class women born in Bosnia. Meanwhile they join thousands of parents across Europe, whose children were also lured by the call of the caliphate.

Mothers know what nobody knows 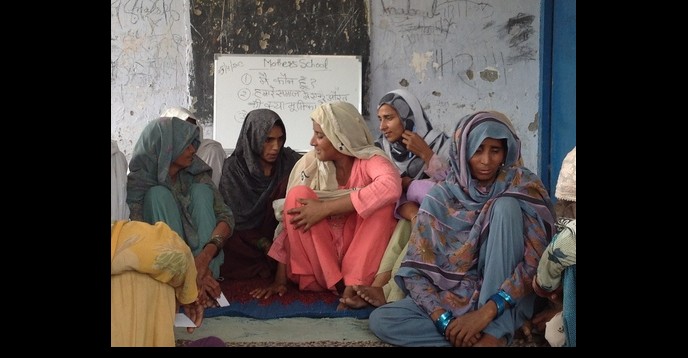 In the face of this threat, which not only calls for, but necessitates the talents and efforts of mothers, Women without Borders has been working to bring the Mothers School Model to Europe to combat the ongoing foreign fighter problem. Working together is the call of the hour. We brought together one unlikely group of allies, mothers from Belgium, France, Germany, Sweden and Canada whose children decided to follow the lure of Syria and become fighters or brides of fighters came together for the first time in Vienna last December not only to share their grief but to reach out to security stakeholders and warn families to act at the earliest.

These mothers are not only victims, but they are key preventative actors. Elfriede, a mother from Germany says it well. "I am here because I won't keep quiet. If we keep quiet we are siding with the people who ruined our children" Her 19-year-old son left two years ago and she does not know if he is still alive. In sharing their experiences, these mothers are in fact a valuable source of information. No politician, no secret agent, is closer to the mechanisms of recruitment than the families. They are the most important, albeit unwitting and frightened witnesses to their children's dissent on the path to radicalization. By learning from the personal experiences of these mothers we can find a way to unlock the riddle of radicalization.

From our conversations we have learned that many girls become pregnant within five to six months, and suffer from depression because they feel exploited as work and sex slaves. Many of them send calls for help, saying that there is a chance for them to escape while the men are at the front. So far none of these calls for help have been followed up; it is a dangerous undertaking requiring a whole range of supporting measures.

One mother I interviewed received the following text message from her 17 years old son: that they had only one weapon between the five of them, that they were to be sent to the front and that the boy was terrified. It is only the mothers who learn about these fears. These mothers must be mobilized to get the message across to siblings, neighbors and friends. The silence of those affected must be broken, their voices need to reach those for whom it is not too late.

Western nations and security strategists seem to be overwhelmed and to take short cuts in this increasingly grave situation mainly because they cannot address those directly involved. So far, we have left our families, teachers, youth and, most importantly, mothers alone to cope with growing extremism. This is not only a lost opportunity; it is a ticking time bomb.

One thing has become clear from our work with mothers of children departing for Syria. The mothers saw certain signs. They observed early behaviors, and many of them expressed to us a “gut” feeling but lacked the knowledge and the confidence to respond properly. They could have intervened at a certain moment if they had the capacity: the self-confidence, the support, and the skills. The essential question is how to respond before it is too late? The MotherSchools, brought to Europe, sensitizes mothers whose children are at-risk of radicalization that it is not only their right, but also their responsibility to respond before it is too late. One thing remains consistent: in spite of a youth’s total detachment to their former world there is a persistent attachment to their mothers. They are indeed the missing security ally.

E. Schlaffer is a social scientist, writer and activist founded Women without Borders in 2002. Her research and activities focus on women as agents of change and as driving forces to stabilize an insecure world. In 2008 she launched SAVE - Sisters Against Violent Extremism, the world’s first female counter-terrorism platform.

Schlaffer has received numerous accolades for her work promoting women in the security arena: Hillary Clinton has twice highlighted SAVE’s contributions to the field; in 2010 she was named as one of Women’s eNews “21 Leaders of the 21st Century” and in 2011 one of Newsweek’s “150 Movers and Shakers” and she has received many national prizes including the Käthe Leichter Austrian State Prize for Gender Equity and Research, the Theodor Körner Prize for Outstanding Research and the Donauland Book Prize for Excellency in Non-Fiction Writing. In 2015, she was awarded the Soroptimist International Europe Peace Prize, at the Soroptimist International Convention in Istanbul.

Sisters Against Violent Extremism (SAVE)