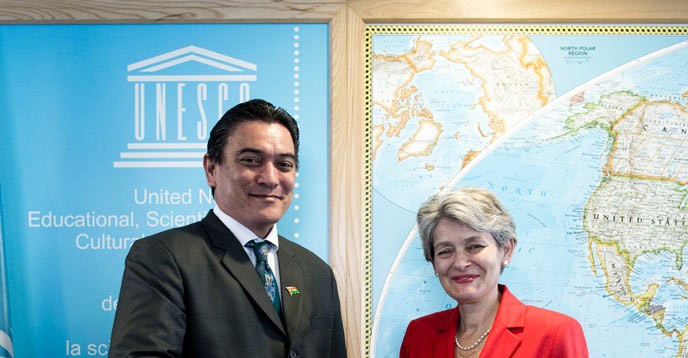 Prime Minister Moana Carcasses Kalosil of Vanuatu expressed his country’s ambition to participate more actively on the international stage during a meeting with Director-General Irina Bokova on 16 October at UNESCO Headquarters.

He urged UNESCO to pursue joint action on climate change, in a region where populations are being displaced by rising seawaters that are submerging islands. “We need to find workable solutions,” he asserted, briefing the Director-General also on the challenges of Vanuatu, an archipelago of over 80 islands, where 58% of the 250,000-strong population is under the age of 25, and the only independent Francophone country in the Pacific. “The challenge of leaders in the Pacific is to find a middle way between preserving our culture and advancing development,” he said.  Although 95% of Vanuatu’s children are in school, the Prime Minister also highlighted the importance of reaching the last 5%, notably through advocacy with communities and traditional leaders.

The Director-General briefed the Prime Minister on UNESCO’s commitment to “strengthen the resilience of people” in Small Island Developing States (SIDS), referring to the work of the Intergovernmental Oceanographic Commission on ocean science, the Education for Sustainable Development programme, including climate change education, and  cultural approaches to preserving biodiversity. She said that UNESCO also advocated for SIDS in global forums, such as the UN Conference on Sustainable Development (Rio+20) in 2012. Looking ahead to September 2014, the Director-General underlined the importance of the Third Global SIDS Conference in September 2014, which would be followed by a high-level debate on climate change at the United Nations General Assembly.

The Prime Minister also confirmed to the Director-General that Vanuatu was running for a seat on UNESCO’s Executive Board.