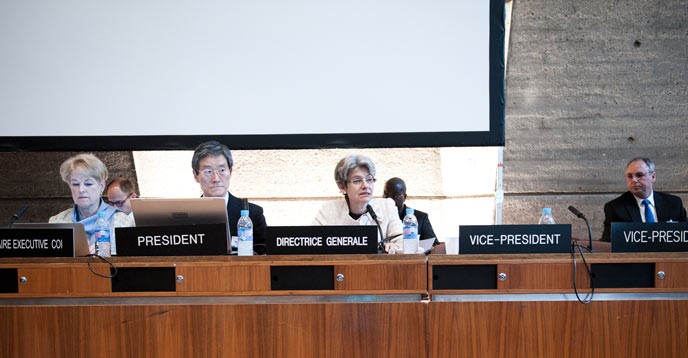 On 26 June, the Director-General of UNESCO, Irina Bokova, opened the 27th Session of the Intergovernmental Oceanographic Commission (IOC) Assembly, held in UNESCO Headquarters in Paris from 26 June to 5 July 2013.


The Director-General highlighted the importance of IOC’s role in advancing UNESCO’s values and priorities and referred to the Commission’s work as “it illustrates the power of knowledge and scientific cooperation to save lives and to bring people and States together,” said the Director-General.

“This is UNESCO’s core mandate, and we must recognize all of this and build on it,” she continued.

The IOC Assembly, composed of 145 Member States, is the principal organ of the IOC and establishes its general policy and main lines of work. The IOC Assembly meets every two years.

On the occasion of the IOC Assembly, the Director-General will inaugurate an exhibition at UNESCO Headquarters by Tara Oceans Expedition on 27 June.