Director-General on official visit to Guatemala 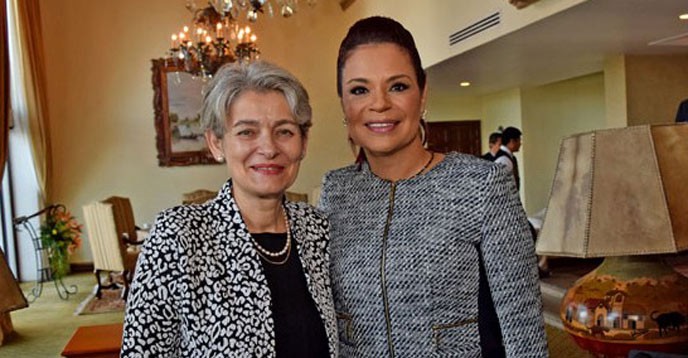 On 16 January 2015, the Director-General of UNESCO, Irina Bokova, will undertake a three day official visit to Guatemala, where she is expected to meet with the President, Otto Pérez Molina, the Vice President, Roxana Baldetti, the Minister of Foreign Affairs, Carlos Raul Morales, and the Minister of Interior, Mr Héctor Mauricio López Bonilla.

The Director-General is also expect to meet with high level government representatives working the fields of competence of UNESCO, including the Minister of Social Development, Mr Edgar Leonel Rodríguez Lara, the Minister of Culture and Sports, Mr Dwight Anthony Pezzarossi García, and the Minister of Education, Ms Cynthia Carolina del Águila. The Director-General will meet with Ms Karla Herrera, Secretary of Social Communication of the Presidency of the Republic, and Ms Margarita Castillo, Advisor-Coordinator in the Construction Safety Program for Journalists.

Irina Bokova will also meet the Mayor of the City of Guatemala Mr Álvaro Arzú, from who she will be receiving the «Keys of the City ». In this respect, Guatemala City was declared “Ibero American Capital of Culture” for the year 2015. She will also meet the President of the Congress of the Republic, Mr Luis Rabbé Tejada. It is also scheduled for her to meet the United Nations Resident Coordinator, Ms Valerie Julliand, and with the UN Country Team.

In Guatemala, the Director-General will take part in an event to present the Action Plan of the National Policy for Violence Prevention, held in the framework of the United Nations Fund for Peace Consolidation. This plan is a top priority for Guatemala, due to the increase of the gang-related violence that has dramatically risen in the country in recent years. UNESCO, as well as other United Nations agencies in the country, has contributed to the plan within its fields of competence. She will also take part in an event organized by the Ministry of Education, where she will have an encounter with a group of young indigenous students.

Accompanied by the Minister of Education, the Director-General will participate in the first “Civic Monday Ceremony” of 2015 at the National School for Girls “Dolores Bedoya de Molina”. This activity has been established by the education authorities of Guatemala to increase the learning of civic values, peace and preservation and conservation of the environment.

While in Guatemala, the Director-General will visit Antigua Guatemala, accompanied by the Minister of Culture, where she will meet the Mayor, Mr Edgar Francisco Ruiz Paredes. She will also have an aerial visit of Mayan archaeological sites and Atitlàn Lake.

The Director-General will receive, on behalf of UNESCO, the decoration “Pedagogical Order Juan Arevalo Bermejo”, which the Guatemalan education authorities will award to UNESCO in honor of 70th anniversary of the Organization.