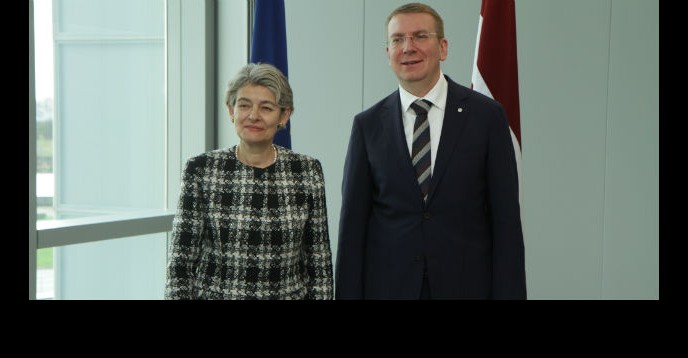 On 3 May, the Director-General of UNESCO, Irina Bokova, met with the Minister of Foreign Affairs of the Republic of Latvia, Edgars Rinkēvičs.

The Foreign Minister thanked the Director-General for her visit to Latvia, as well as her leadership of UNESCO at a time of change, including through important reform of the Organisation.

He reiterated the priorities of the Latvian Government, to support freedom of expression as well as to safeguard cultural heritage and advance education for global citizenship. On this occasion, the Foreign Minister announced a new voluntary contribution to the International Programme for the Development of Communication.

The Director-General took this opportunity to highlight the rising leadership of Latvia in UNESCO, as EU President, and as member of the UN Human Rights Council. The contribution to the IPDC is another important symbol of this strong commitment. She congratulated the government and people of Latvia on the anniversary of the restoration of independence of 1990.

The Director-General also briefed on the range of activities of UNESCO to counter the rise of violent extremism, through education, and across the board.

She noted in particular her recent visits to Iraq as well as UNESCO's leadership in coordinating the implementation of the February 2015 UN Security Council Resolution 2199, to halt the illicit trafficking of cultural goods from Syria and Iraq.

The Director-General thanked the Minister for Latvia's support to UNESCO reform. The meeting was an opportunity also to discuss developments in the region.

The Ambassador Extraordinary and Plenipotentiary of the Republic of Latvia to the French Republic, Ms Sanita Pavļuta-Deslandes accompanied the Director-General throughout the visit.

The Director-General also met with Minister for Education and Science, Mārīte Seile.

The Minister provided the Director-General with a full briefing on the wide ranging reform underway across the education sector in Latvia -- guided by a commitment to balance equity and quality. The Minister spoke of the need to advance across three main points -- knowledge, skills and attitudes, to provide learners with the right capabilities, also as global citizens. She underlined in all this the importance of teacher training, as well as efforts to harness the full power of ICTs.

The Minister explained the changes undertaken in TVET and being led in higher education, including in financing.

The Director-General thanked the Minister for the depth of cooperation between Latvia and UNESCO, including within the framework of the EU. She briefed on UNESCO's leadership in advancing global citizenship education, including within the context of the future Sustainable Development Goals.

Ms Bokova pledged UNESCO's full support to Latvia in all of its efforts, thanking the Minister again for the Government's leadership and vision, which echoes with UNESCO's mission.

On the same day, the Director-General was given a guided tour of the National Library of Latvia, in Riga, where the World Press Freedom Day celebrations were held.