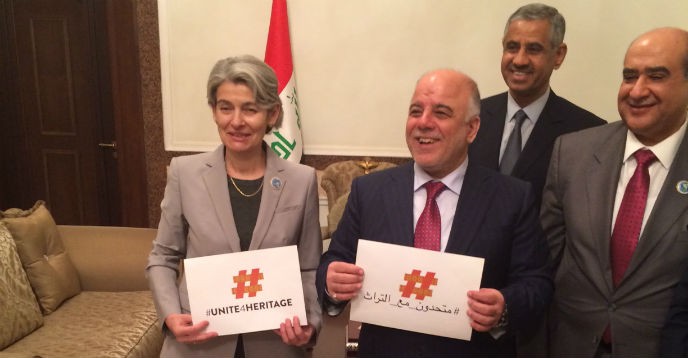 On 28 March, UNESCO Director-General, Irina Bokova, met with the Prime Minister of Iraq, HE Mr Haider Al-Abadi, in Baghdad, Iraq.

"Ignorance is our enemy number one", explained Prime Minister Abadi, stressing the importance of investing in education and in culture, to overcome the challenges faced by Iraq during the current crisis and to build a genuine national reconciliation.

Commending the efforts of the Iraqi Government, the Director-General expressed UNESCO’s solidarity and firm resolve to support and assist, as both education and culture continue to be prime targets of violent extremism and sectarianism in the country.

The Director-General informed the Prime Minister of UNESCO’s recent efforts to strengthen mobilization within the international community for the protection of Iraq's cultural heritage and diversity.

She highlighted UNESCO's continued advocacy to fight the looting and trafficking of looted artifacts in Iraq and, in this regard, its leadership in the implementation of Security Council Resolution 2199, which renews the prohibition of the trade of cultural objects originating from Iraq.  The Director-General also stressed the need to hold perpetrators of the deliberate destruction of cultural heritage fully accountable; and of her exchanges on this matter with the Prosecutor of the International Criminal Court and the need to investigate the circumstances of acts of intentional destruction of cultural heritage in Iraq, to establish if and when war crimes have been committed.

The Director-General informed the Prime Minister of the launch in Baghdad, the same day, of the #Unite4Heritage global campaign as part of broader awareness-raising and mobilization of young people to stand up for the safeguarding of heritage threatened by violent extremism and to provide a counter-narrative to sectarian propaganda.

She also informed him about the launch at Baghdad's National Museum of the new project “Preventive Conservation of Iraq’s Museum Collections and Cultural Heritage sites at Imminent Risk” to protect Iraqi museum and archaeological treasures.

The Prime Minister and the Director-General agreed on the need to lay concrete foundations for hope in Iraq, in particular for the young generation, and on the critical role of education and culture in this regard.