UNESCO Director-General Irina Bokova today launched a new policy guide for educators on teaching about the Holocaust and, more broadly, genocide and mass atrocities. Speaking at the 15th Plenary Assembly of the World Jewish Congress in New York, the Director-General characterized the guide as an important tool, which seeks to promote education about the history of genocide as a tool for peace.

“With this innovative and one of a kind policy guide, UNESCO speaks to the next generation of leaders, of teachers, of citizens around the world. We must empower future generations with the lessons from the Holocaust, equip our children and grandchildren with the tools they need to vanquish intolerance and hate, bigotry and anti-Semitism, racism and prejudice,” said Ms. Bokova.

“Education about the Holocaust and preventing genocide” is the first step in a series of projects conducted with the support of the Canadian Ministry of Foreign Affairs. The new guide is designed to be a resource for policy-makers, curriculum developers and textbook writers to engage in or reinforce education about the Holocaust and the prevention of genocide. UNESCO’s policy guide provides effective responses and recommendations to facilitate debate on these issues in classrooms. 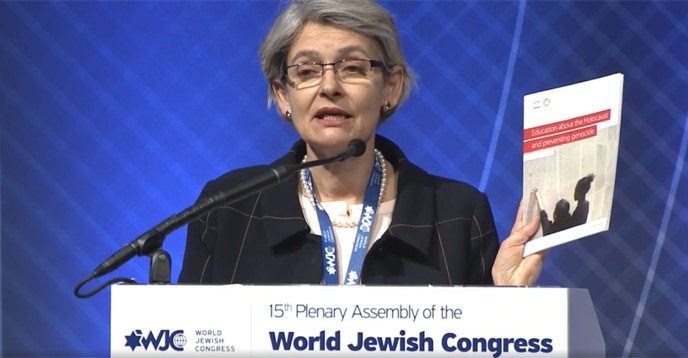 UNESCO’s publication aims to help young people gain a better understanding of the historic dynamics, which have fueled violence. Although examining the difficulties of the past is challenging, understanding the emergence of these phenomena is essential to encourage learners to identify the roots of prejudice, enhance their critical thinking and help them turn their back to all forms of racism, anti-Semitism and prejudice.

“UNESCO is the only United Nations agency to run a dedicated global teaching programme on the history of the Holocaust as a lever against anti-Semitism today, the Director-General said. “We place the fight against xenophobia, racism and anti-Semitism at the heart of our action for peace. I am convinced education, culture and knowledge have become core security issues in the world today to combat violent extremism built on distortions of faith or history.”

United Nations Secretary-General Antonio Guterres, who was also in attendance, said he would be on the frontlines in the fight against anti-Semitism. In a video message to the plenary, U.S. President Donald Trump spoke of the necessity to combat new forms anti-Semitism.

The World Jewish Congress is an international organization representing Jewish communities and associations in 100 countries around the world. It has been an official partner of UNESCO since 1962. The 15th Plenary Assembly brought together more than 600 Jewish community leaders and representatives to assess and discuss major issues of concern around the world, including anti-Semitism and the rise of extremist political movements.

For more information on the main points of the guide click here.