The Director-General in Haiti, three years on 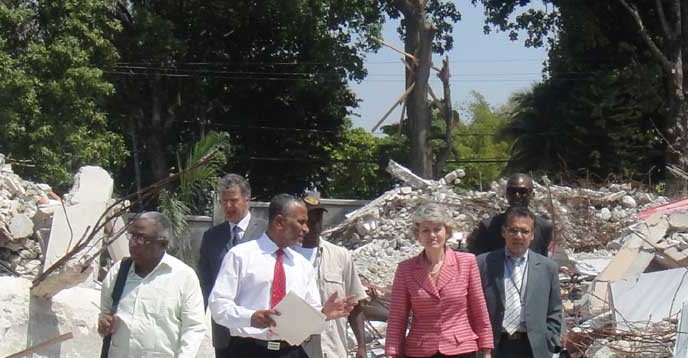 Irina Bokova, Director-General of UNESCO, is visiting Haiti from 16 to 18 September 2013, in order to measure the progress made in cooperation between Haiti and UNESCO, three and a half years after her visit in March 2010, following the earthquake of 12 January. The Director-General will be accompanied by the Right Honourable Michaëlle Jean, UNESCO Special Envoy for Haiti.


During her visit, Irina Bokova will meet Mr Michel Martelly, President of the Republic of Haiti, with whom she will visit the National Park in the Massif de La Selle, officially declared Haiti’s first UNESCO Biosphere Reserve in 2012. Irina Bokova is also expected to meet the Prime Minister, Mr Lamothe, and the Ministers of Foreign Affairs, Education, Culture and the Environment, as well as donors and partners of UNESCO in Haiti.

The Government of Haiti has made strengthening support for the education and culture sectors two of the strategic pillars for the rebuilding of Haiti, and has designated UNESCO as a key partner. UNESCO is responsible, in particular, for coordinating the sectoral group on education in the country and has worked since 2011 to improve the quality and oversight of education – namely through the establishment of a system of collecting and processing of reliable statistical data, curricula reform and teacher training. This last point is of vital importance to the Director-General.

“There has been a massive effort in Haiti to ensure access to free schooling for all. The challenge we face is to improve the quality of education, and quality is achieved through teacher training and professional development,” she emphasized before her visit.

Irina Bokova is expected to visit the National History Park Citadel, Sans Souci, Ramiers, which has been inscribed on UNESCO’s Word Heritage List since 1982, and to meet key players of Haiti’s cultural sector. The Director-General will review the various initiatives conducted with UNESCO during the past three years to support cultural industries as a force for inclusion and development -- training workshops with craftpersons on the quality of products and their marketing, an inventory of the built heritage of Jacmel with the Haitian Institute for the Preservation of National Heritage (ISPAN) training on the intangible heritage with the Bureau of Ethnology, and reshaping policies on copyright and publishing.

The Director-General will underline the key role of education, sciences and culture in the rebuilding of Haiti. The newly created La Selle Biosphere Reserve, for instance, provides capacity-building opportunities, in the fields of science and management of the country’s natural resources -- particularly in the sustainable management of water resources. It presents significant potential for international cooperation, particularly with the Dominican Republic, because of its central position in the Caribbean ecological corridor.

“All of these initiatives have a strong potential for development, which calls for political support from us at the highest level and renewed commitment”, said the Director-General.

The Director-General will also visit the Campus Henri Christophe of the State University of Haiti at Lemonade, created after the 2010 earthquake, a symbol of recovery and development of in the region of Great North through higher education. She will deliver a speech on the role of UNESCO in strengthening higher education for development education in Haiti.