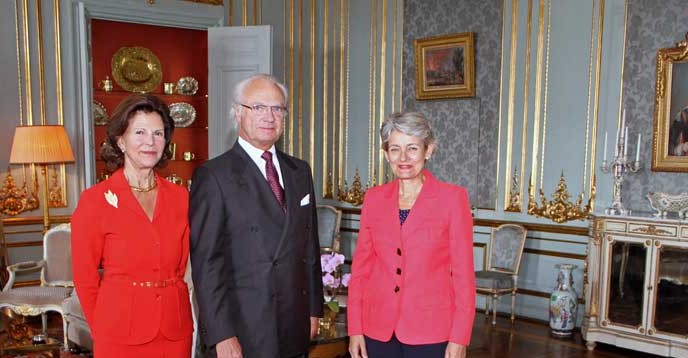 On 2 September, the Director-General of UNESCO, Irina Bokova, participated in the High Level Panel of the Opening Plenary Session of the Stockholm World Water Week, on the theme “Building partnerships on water cooperation for future oriented decisions and forcing implementation”.


In her intervention, the Director-General urged greater cross-sectoral dialogue and a comprehensive approach for sustainable water resources management, noting that water is the common denominator of many global challenges, in health, in farming, in energy, in urbanization.

“Building water cooperation is more than a technical or scientific issue”, said Ms Bokova. “It is about fighting poverty and hunger, and protecting the environment. It is about saving children from disease. It is about allowing girls to go to school instead of walking kilometres to fetch water. It is about providing women and men with access to sanitation, wherever they live. Fundamentally, it is about peace, on the basis of dialogue between States and across regions.”

Irina Bokova also acknowledged tremendous progress over time in awareness of water as a fragile public good, both in quantity and quality, due to overexploitation and pollution by human activities. She emphasized that the target-setting efforts by the United Nations (MDGs and SDGs) have served an important role in bringing attention to water issues.

The Director-General underlined that, despite common belief, water continues to prove to be a catalyst for cooperation, rather than conflict.

“There is enough freshwater in the world – the challenge is to share it, to better assess risks and uncertainties, to link science more tightly with policy, to leverage collaborations between business, civil society and governments”.

She concluded her remarks by noting that water security is only achievable through strong water governance and cooperation.

On the same day, the Director-General met with Ms. Gunilla Carlsson, Minister for International Development Cooperation of Sweden, and was granted an audience by Their Majesties the King and Queen of Sweden. Topics discussed during included water cooperation, freedom of expression, sexual education and HIV/AIDS, gender equality, the Post-2015 development agenda, World Heritage, Education for All, and the future for UNESCO, including both opportunities and challenges.