UNESCO Director-General Audrey Azoulay and Noura bint Mohammed Al Kaabi, the United Arab Emirate’s Minister of Culture and Knowledge Development, today agreed to undertake the rehabilitation of the Syriac Catholic Al-Tahera Church and the Latin Al-Saa’a Church in the Iraqi city of Mosul. The agreement is an addition to UNESCO’s Revive the Spirit of Mosul Initiative, marking a major advance for the restoration of cultural and religious diversity to the Iraqi city and an important step for the Christians of the East who are part of Mosul history and future.

During their meeting at UNESCO Headquarters in the presence of the Ambassador of Iraq to France, Abdulrahman Hamid al-Husseini, the Minister and the Director-General signed an amendment to that effect, extending the scope of the agreement between the Organization and the United Arab Emirates that paved the way launch of UNESCO’s flagship initiative.

The signatories qualified the amendment as “a major step for the recovery of the Old City of Mosul.” They described the rehabilitation of the churches, damaged during the occupation by Daesh, as important not only because of their value as cultural heritage, but also as testimonies to the diversity that has been the historic hallmark of the city, a proud crossroads of cultures and a peaceful haven for different religious communities over the centuries.

Al Tahera Church, built from 1859 to 1862, sustained severe damage in recent years and a large part of its arcades and outer walls were destroyed. The structure of the Al-Saa’a Church was damaged during the occupation of the city by Daesh and its convent was looted and ransacked. Completed in 1873, the church is often referred to as “Clock Church” due to the clock lodged in its tower, a gift from Empress Eugenie of France to the Dominican Fathers of Mosul. Once rehabilitated, its convent will serve both as place of worship and as a community centre for all of Mosul’s residents.

Brother Nicolas Tixier and Brother Olivier Poquillon, who represented the Dominican order during today’s meeting, thanked UNESCO in the name of the order and reiterated their attachment to Mossoul, where Dominicans have built bridges between all communities since the 18th Century.

UNESCO is liaising closely with the Dominican Order and the Christian Waqf in the rehabilitation of the churches.

During their meeting Ms Azoulay and Ms Al Kaabi reviewed ongoing successful cooperation in restoring the Al-Nouri Mosque and its Al-Habda minaret, due to begin in the coming days after a necessary period of stabilization. It is a major component of the Revive the Spirit of Mosul initiative, funded by the UAE.

Beyond the rehabilitation of architectural landmarks, the initiative includes:

Students in the departments of archaeology, architecture and engineering of the University of Mosul will benefit from taking part in the process of restoration of the landmark buildings. 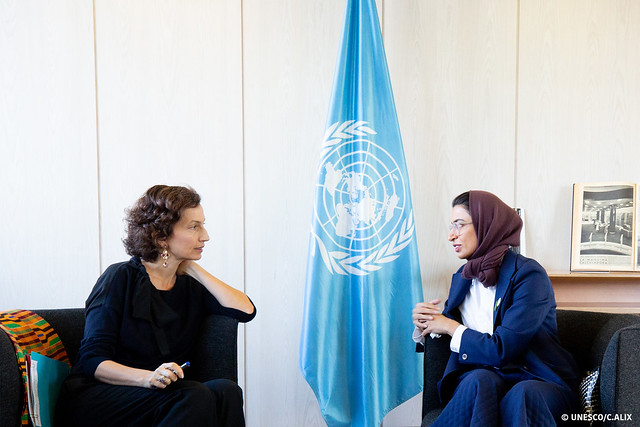