The Director-General accompanies the UN Secretary-General in Moscow 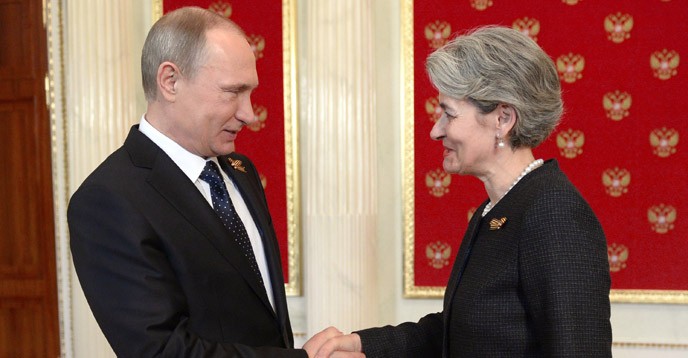 On 9-10 May 2015, Ms Irina Bokova, UNESCO Director-General, travelled to the Russian Federation as part of the official delegation of the UN Secretary-General Ban Ki-moon, attending the commemoration events to mark the 70th anniversary of the victory in the “Great Patriotic War”.

In Moscow, the Director-General joined Mr Ban Ki-moon in a meeting with President Vladimir Putin of the Russian Federation. Together with several Heads of States, she participated in a joint flower laying ceremony at the Tomb of the Unknown Soldier.

On 10 May, Ms Irina Bokova opened, together with Deputy Prime Minister Olga Golodets and Minister of Culture Vladimir Medinski, the International Conference on “World Culture as a Resource for Sustainable Development,” held at the Russian Academy of Arts.

In her keynote speech, the Director-General recalled that the conference was taking place in the context of UNESCO's 70th anniversary and underlined the key role of culture “as a force binding women and men together as a single humanity” and “as a driver of creativity and innovation, to foster human development” and “build resilient societies”.

On the same day, the Director-General visited the Jewish Museum and Tolerance Centre in Moscow. Accompanied by Mr Berl Lazer, Chief Rabbi of Russia, and Mr Alexander Boroda, President of the Federation of Jewish Communities of Russia and Director of the Jewish Museum, Ms Bokova undertook a guided tour of this complex, informing her hosts of UNESCO’s work on the Holocaust education and reaffirming the Organization’s commitment to promote tolerance, intercultural dialogue and respect for human dignity.

The Director-General visited also the International Center of the Roerich, where she was presented with the legacy of the Roerich family, especially relating to the protection of cultural heritage during armed conflicts, as embodied in the Roerich Pact of 1935.