Community members stand together for girls’ right to education in Tanzania 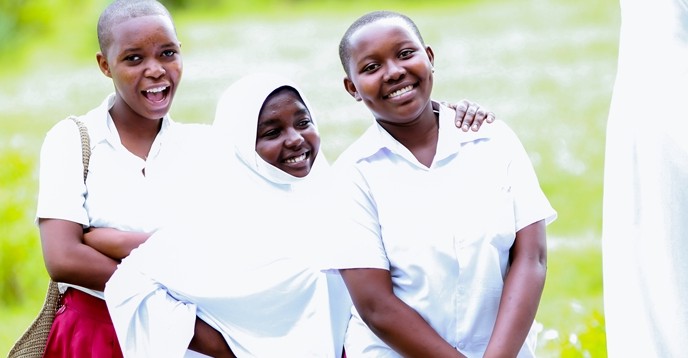 “I have realised the importance of investing in girls’ education,” stated Adinani Omary Hiza, an influential community leader of the Kalumere village in Lushoto, United Republic of Tanzania. Supported by the UNESCO Malala Fund for Girls’ Right to Education, UNESCO has helped enhance adolescent girls’ retention and performance in secondary schools in Tanzania.

The importance of the community

Community members have come to the forefront to encourage girls to stay in school and get an education. This has not always been the case in Tanzania, where adolescent girls face many obstacles to completing their secondary education. Girls are often married early and tend to drop out of school due to unintended pregnancies, insufficient support from teachers or low performance. Community members including teachers who promote girls’ education and encourage them to stay in school can have a significant influence on the lives of these girls, their families and their future as empowered full-fledged members of the community.

In the Tanga region, the community as a whole is now supporting girls to continue their education rather than forcing them into early marriage. Kassim Sengasu, Lushoto District Education Officer, indicated that since UNESCO’s interventions, there has been a significant change of attitude towards girls’ education in the community, including a noticeable impact on the eradication of female genital mutilation (FGM). The project has helped raise the awareness of community members in Tanzania in favour of girls’ education and sensitised them to issues that continue to represent barriers to girls.

Testimonies by headmasters, teachers and students from ten schools across five districts indicated a reduction in the number of girls who dropped out of school due to unintended pregnancies or early marriage. For example, the number of teenage pregnancies at Potwe secondary school has decreased from 16 cases in 2015 to 2 in 2018. Perceptions have changed in relation to early marriage, FGM and other communal norms hindering girls’ education. Schooling, both through the formal secular system and through madras, is encouraged.

As part of the project, teachers were provided with the skills to foster gender-responsive pedagogy and learning environments that better support girls at school. Isaac Magele, Headmaster of Kalumere secondary school, explained how the various teacher trainings provided through the project contributed in enhancing his commitment to improve the school environment in favour of girls. He stressed that teachers have been sensitised to better respond to girls’ needs and motivate them to stay in school.  In addition, the creation of school-based projects, such as the establishment of a clove tree nursery at Shebomeza secondary school, and peer mentoring through the project has fostered a sense of teamwork and collaboration among students, as well as between teachers and students.

It is clear. Support from the community and the school has empowered girls in Tanzania to continue their education. “Young girls are now eager to finish their secondary education, as they feel that education is key to a promising future and a better life,” stated Hiza. Their performance at school has increased, their relationship with teachers has improved and girls are determined to stay in school and perform well.

As the project comes to an end, UNESCO is committed to mobilising community members as key agents to support girls’ in their respective community to go to school and complete their education.  “The project has helped me realise that as a student, I need to be confident and work hard to achieve my dream,” says Lydia Michael Mganga, a very good student at Shebomeza secondary school. Lydia has chosen to study science subjects to become what she dreams of when she grows up, “I hope to be a doctor.”

From 15 October to 18 December 2018, UNESCO is running a digital campaign on the #RightToEducation to mark the 70th year of the Universal Declaration of Human Rights. Join here.