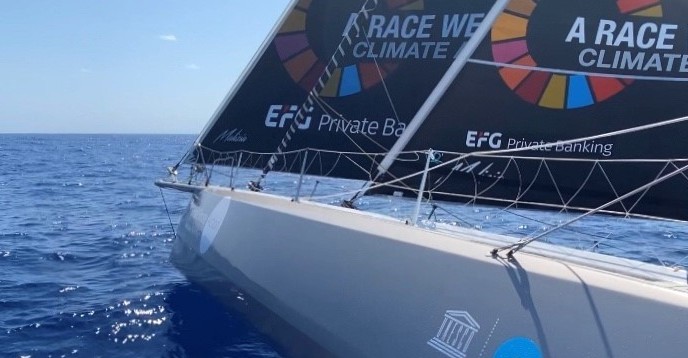 At the 2019 edition of the Paris Boat Show, IMOCA presented the series of measures taken during the 2019 Transat Jacques Vabre, in which various boats collected data for scientific research in collaboration with UNESCO’s IOC.

“It is great that the Nautic Show has taken into account this aspect of sustainable development,” declared Paul Meilhat, one of the most committed competitive sailors.

“There is still a lot to do for progress, but this is a good start: the world of ocean racing has been looking forward to getting more engaged toward the protection of our ocean. For IMOCA, this comitment includes working with race organizers, but also being present in events like the Nautic Show, which brings together all people involved in the maritime sector once a year. Everyone is aware that there are many changes to make in order to reduce our impact on the Ocean. We need to start immediately before it is too late. It is nice that the IMOCA class takes part of the change”.

During the Transat Jacques Vabre, four double-handed crews contributed to the collection of scientific data. Alexia Barrier and Joan Mulloy (4myplanet) took an Argo float aboard.

“I am collecting data at sea to preserve my playground,” explained Alexia. “We had two scientific missions for the Transat Jacques Vabre. The first one was to use an Argo profiler. This is a float, which picks up data on the oceans at a depth of 1000 meters, to allow satellites to observe the Ocean more comprehensively. We also had a thermo-salinometer, which takes measures every four seconds on the surface of the water for scientists in European research programmes, in particular for the Global Ocean Observing System (GOOS) and France's Ifremer. This data is important to add to current studies observing the impacts of climate on routes rarely taken by research vessels”.

Boris Herrmann and Will Harris (Malizia 2 Yacht Club de Monaco) took aboard a weather drifter float, as did Stéphane Le Diraison and François Guiffant (Time For Oceans). This buoy enables measurements to be taken of the surface temperature and the atmospheric pressure, as well as surface currents. The buoy regularly sends back extremely precise scientific data to the Global Telecommunications System, the World Meteorological Organization data network. This platform enables forecasters and scientists from around the world to access information free of charge.

Fabrice Amedeo and Eric Péron (Newrest-Art & Fenêtres) took aboard an oceanographic sensor capable of measuring levels of CO2 and salinity as well as the surface temperature. This censor carries out precise measurements of the impact of global warming on the ocean. “I wanted to give a purpose to my sailing and take things seriously by serving science,” explained Amedeo.

All the data collected will be shared with the scientific community as open data, benefitting in particular the ocean community working in the framework of GOOS through collaboration between UNESCO's IOC and IMOCA, combining the recovery of quantitative with qualitative data in order to improve research related to marine innovation.

One Planet, One Ocean, The Ocean and Climate Change, Preserving the Ocean, Monitoring the Ocean