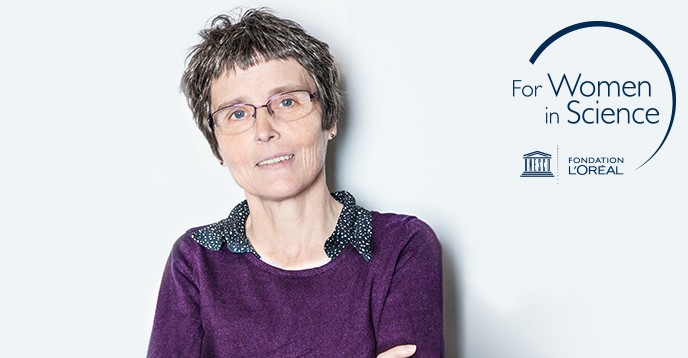 In today’s instantaneous, media-driven world, scientific and mathematical challenges requiring deep thought and intellectual engagement with concepts and abstract theories rarely make the headlines. With the exception of a few more ‘celebrated’ branches of science, the contribution of scientists to society typically remains hidden, diverting government funding away from science, according to L’Oréal-UNESCO For Women in Science Awards 2019 Laureate for Europe, Prof. Claire Voisin.

Professor Voisin is rewarded for her outstanding work in algebraic geometry. Her pioneering discoveries have answered fundamental questions on the geometry, the topology and Hodge structures of complex algebraic varieties.

With a naturally inquisitive mind, Prof. Claire Voisin began exploring mathematics from a young age, encouraged by her father. She was delighted, aged 12, to discover the poetry of algebra and the joy of combining conceptual and abstract reasoning to prove a concrete result. “It was wonderful to understand so fully how things work,” she says.

In her intellectual elasticity and bold, uncompromising and rigorous approach, Claire Voisin she regularly explores new ideas and conundrums as she walks through the streets of Paris. Her love of finding theories, hidden logic and precise structures extends beyond mathematics to art and poetry too, rendering her unique: an artist of mathematics.

The desire to explore complex subjects and push the boundaries has shaped Claire Voisin’s studies and career, leading her to focus on abstract mathematics. She specialises in algebraic geometry, a discipline that studies intrinsic properties of geometric figures starting from their equations. Throughout history, geometry has played an important role in helping us to understand the structure of the world, and more recently, the universe. The first geometers calculated the radius of the Earth, and physicists have built on theories from algebraic geometry to make their own discoveries.

Speaking about the value of mathematical research, Prof. Claire Voisin says that it is hard to predict what will remain important in the long term. The value of research in pure mathematics is not measured by immediate applications, but it is important particularly in terms of developing new ways of thinking. “It might be just one construction, one argument, or the main result that are important for the future,” she says.

Prof. Claire Voisin is a member of the Académie des Sciences and was the first woman mathematician to enter the Collège de France, the country’s most prestigious research institution. She is also one of five women to have been awarded the gold medal from the CNRS (the French National Centre for Scientific Research).

While Prof. Claire Voisin has not personally experienced gender discrimination during her career, she recognises that most women scientists do not achieve the recognition they deserve, and their work is often undervalued, or not considered as equal to men’s work. “I think women have to make more effort than men, in particular at the beginning of their career, in order to be considered as serious researchers,” she says.

Indeed, with too few women becoming mathematicians and scientists, particularly in her field, Prof. Claire Voisin believes that women in science are too often treated as a minority, rather than “scientists among scientists”. The lack of women in research roles represents “a significant loss for science”. She recommends that all young women scientists should be ambitious and overlook external perspectives, and hopes that her recognition as a L’Oréal-UNESCO For Women in Science laureate will help encourage more women to pursue mathematics, including pure mathematics.

The L’Oréal-UNESCO For Women in Science Awards

Each year, the L’Oréal-UNESCO For Women in Science Awards celebrates 5 eminent women scientists and their excellence, creativity and intelligence, from each world region (Africa and the Arab States, Asia-Pacific, Europe, Latin America and North America). The Fondation L’Oréal and UNESCO have worked together for more than 20 years to help empower more women scientists to achieve scientific excellence and participate equally in solving the great challenges facing humanity. Together they have celebrated more than 3,000 women scientists in 117 countries, and awarded 107 laureates.

The 2019 Laureates’ achievements will be celebrated alongside those of 15 promising young women scientists from around the world at an awards ceremony on 14 March at UNESCO’s Headquarters in Paris.

Partner for Natural Sciences, Science for a Sustainable Future, Investing in Science, Technology and Innovation, Science for Society
France