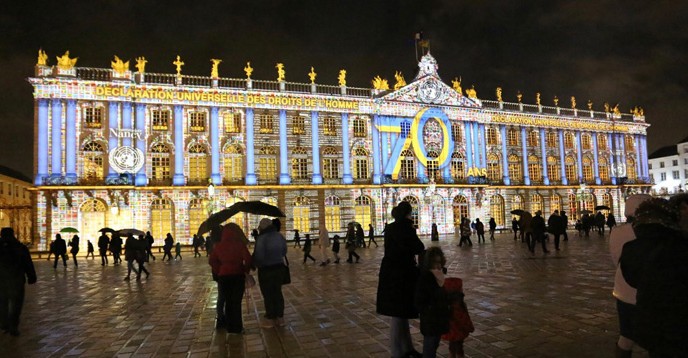 Local governments are and should continue to be key global actors and “co-shapers of a global framework for action” to address current worldwide challenges related to social transformations, together with national governments, international and regional institutions, and civil society. In this context, the Global Steering Committee of the International Coalition of Inclusive and Sustainable Cities – ICCAR adopted the “Nancy Declaration” at its meeting in Nancy (France), on 10 December 2018, in parallel with the City’s celebration of the 70th anniversary of the Universal Declaration of Human Rights.

Led by Mayor Laurent Hénart of Nancy, Mayor Erias Lukwago of Kampala (Uganda) and Benedetto Zacchiroli (President of the European Coalition of Cities against Racism –  ECCAR), mayors and other local officials representing regional and national coalitions charted and adopted this new roadmap for action for ICCAR member cities. The Nancy Declaration calls for renewed commitment to “develop effective responses to the rise of hate, bigotry and violent extremism, growing worldwide phenomena that accentuate racism, intolerance and discrimination, by implementing local and collective advocacy efforts to raise awareness, developing guidelines and tools in response to these threats, and conducting capacity-building and education-related initiatives”.

Ângela Melo, Director of Policies and Programmes of UNESCO’s Social and Human Sciences Programme, affirmed in her opening remarks that there is an urgent need to rethink the role of cities, to provide them with the means to promote inclusion and respect for diversity, and to ensure that they become green, inclusive and smart. A human rights-based approach should be the foundation of preventing and fighting discrimination through promoting inclusion and diversity framed on the 2030 international agenda of the sustainable development goals.

Held at the same time as the Intergovernmental Conference on the Global Compact for Migration (Morocco, 10-11 December 2018), the ICCAR meeting, organized by UNESCO and the City of Nancy, with the support of ECCAR, served as the “common voice” of its member cities. It concurred to “take action in line with the UN Global Compacts on migration and refugees to eliminate prejudice by highlighting the positive and multiple contributions of these groups to all spheres of life in receiving, transition and origin countries.”

The International Coalition of Inclusive and Sustainable Cities – ICCAR was launched by UNESCO in 2004. Represented by seven regional and national coalitions, ICCAR is a 500-plus member network of cities across continents. They advocate for global solidarity and collaboration to promote inclusive urban development free from all forms of discrimination. Over the years, the recognition of ICCAR has increased as a global reference for city-to-city cooperation in the pursuit of inclusion and diversity in the urban space.