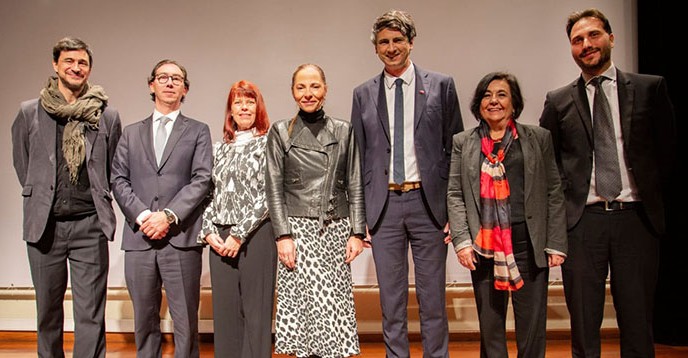 The UNESCO training workshop on SAGA (STEM And Gender Advancement) tools for reducing the gender gap in science, technology, engineering and mathematics was held in Santiago, Chile, from 17 to 19 July. It aimed to transfer competencies to the technical teams of public institutions that will implement the SAGA project in Chile.

During the opening session, Mariana Krause, President of CONICYT, highlighted that "in order to eliminate gender gaps, hopefully in the near future, relevant data is needed, data that we can trust, and this is what the SAGA methodology provides". Guillermo Anlló, UNESCO regional specialist in charge of Science, Technology and Innovation (STI) Policy, said: "It is important to visualize the wealth that the country is losing from the knowledge of Chilean women by failing to involve them in these processes. With SAGA we are looking for a greater incorporation of women scientists, but in a scheme of greater growth of the sciences".

The training included the presentation of global STI and gender indicators, as well as the analysis of national policies and instruments available to provide a clear picture of the current situation in Chile. Throughout the workshop, specific options for reducing the STI gap in Chile were explored through the implementation of SAGA, based on the experience gained during previous implementations in different contexts, as well as identifying possible areas for change and existing barriers in Chilean science and engineering careers.

The event was organized by the Science, Technology and Innovation Policy (STI) division of UNESCO's Regional Office for Science in Latin America and the Caribbean, together with the Division of Equality Policies of the Ministry of Women and Gender Equality of Chile and CONICYT of Chile.

SAGA (STEM and Gender Advancement) is a UNESCO global project that contributes to the promotion of women and girls in STEM by supporting key stakeholders in the design and implementation of STI policies for gender equality. It also provides ways to develop and access evidence to evaluate STI policies using sex-disaggregated data and gathering new information on drivers and barriers in STEM.
The methodology and its tools have been disseminated through national workshops in Argentina, Gambia, Haiti, Jamaica, Lebanon, Sudan, Thailand, Uruguay, as well as in in Quebec, Canada. Through two sub-regional workshops, eight African countries (Benin, Ivory Coast, Ghana, Guinea, Liberia, Nigeria, Sierra Leone and Togo), 11 Arab States (Egypt, Jordan, Kuwait, Lebanon, Oman, Palestine, Qatar, Saudi Arabia, Sudan, Syria and Tunisia) were incorporated.
Currently, the project is supported by 19 international agencies and more than 300 policymakers and key actors worldwide (75% of whom are women) trained to use the methodology.

Why is UNESCO's SAGA project needed in Latin America and the Caribbean?

Gender equality in STEM is the basis for achieving each of the 17 Sustainable Development Goals (SDGs) of the 2030 Agenda. STEM education is also key to preparing students for the job market, enabling them to enter tomorrow's careers.
In this regard, one fact should call us to immediate action: the low number of women researchers worldwide in the field of science. According to the UNESCO Institute for Statistics (UIS), in June 2018 only 28.8% of the world's researchers were women.

With more than 45% of women researchers, Latin America and the Caribbean is one of the two regions of the world that is close to parity. However, institutional and socio-cultural barriers have not been effectively resolved; horizontal and vertical segregation continues to be high according to the area of knowledge in question. Women researchers continue to be under-represented at the highest levels of professional careers and remain a minority in many fields of science, technology, engineering and mathematics (STEM) in most countries in the region.
Women’s participation in STEM professions, compared to the total number of workers in these fields, corresponds to 33% in Uruguay, 29% in Argentina, 23% in Mexico or 32% in Brazil (UNESCO 2018). To enable more and better science, we need greater equality in all areas and at all levels.

Science for a Sustainable Future, Investing in Science, Technology and Innovation, Science for Society
Chile, Uruguay