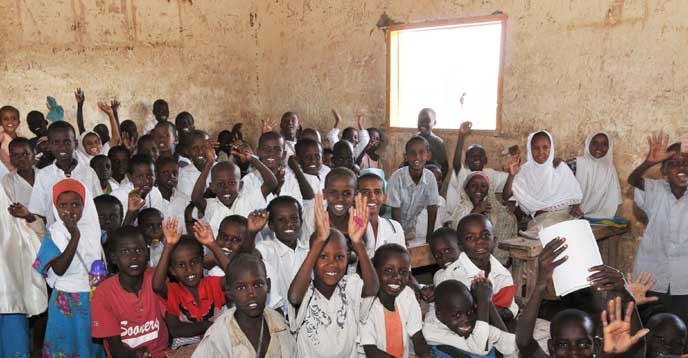 The paper calls for immediate action to bring education to the 28.5 million primary school age children out of school in countries affected by conflict who now represent half of the children who are denied an education. The slow progress in reducing the children out of school in the world has not benefitted those living in conflict affected countries; they now make up 50% of children who are denied an education, up from 42% in 2008.  This announcement is made following the release of a new report by the UNHCR showing that there were 15.4 million refugees by the end of 2012 – more than there have been since 1994 and children make up 46% of those who have been forcibly displaced. These face a disruption at a vital juncture of their learning process and, without the opportunity of an education, risk a lifetime of disadvantage.

Of the 28.5 million primary school age children out of school in conflict-affected countries, 12.6 million live in sub-Saharan Africa, 5.3 million live in South and West Asia, and 4 million live in the Arab States. The vast majority – 95% – live in low and lower middle income countries. Girls, who make up 55% of the total, are the worst affected, as they are often victims of rape and other sexual violence that accompanies armed conflicts.

Of the 69 million adolescents of lower secondary school age who were not in school, 20 million lived in conflict-affected countries in 2011, of whom 11 million were female.

Governments identified conflict as a major barrier towards getting all children into school when they signed the Dakar Framework for Action in 2000. They recognized that children in conflict-affected countries are robbed of an education not only because schools may be closed and teachers absent, but also because they are exposed to widespread abuses. This fact is confirmed by the visual database of inequalities in education, WIDE, developed by the EFA Global Monitoring Report, showing how access to education varies hugely depending on whether a child lives in a conflict affected region of a country or not.

As testified by the experience of Malala Yousafzai, a committed campaigner for girls’ education, shot by the Taliban while travelling to school in Pakistan, classrooms, teachers and pupils will continue to be seen as legitimate targets unless tougher action is taken. To put an end to attacks on education, stronger commitment is needed to fight against human rights violations, to overhaul global aid priorities and strengthen rights for displaced people.

To mark her 16th birthday on July 12, Malala will give her first high level public statement at the United Nations to call for every child’s right to education. As part of this day, in support of the UN Secretary-General’s Global Education First Initiative, international youth leaders will convene to exchange ideas and discuss what can be done to accelerate the goal of getting all children in school and learning by 2015.