CERN and UNESCO: 60 years of science for peace 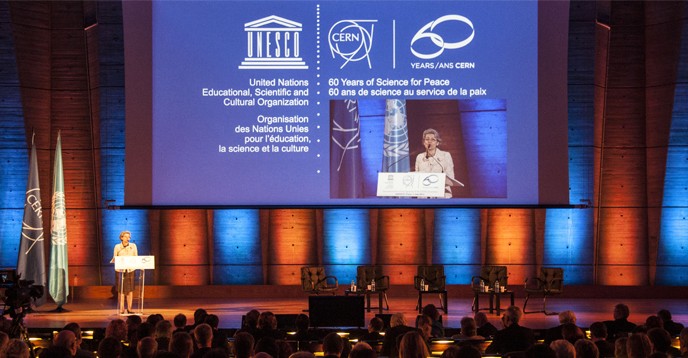 In the aftermath of World War II, following a 4 year conflict that had turned European research in physics to ashes, 12 European countries chose to pursue a common path and created the largest research facility in the field of particle physics: CERN. Europe’s first international scientific organization was ambitious from the beginning, a pioneer aiming to solve the greatest mysteries of the universe and foster peace through international collaboration on the way. Today, 60 years of ground-breaking achievements were celebrated at UNESCO Headquarters in Paris, where it all began.

In order to advance our knowledge of the Universe, CERN pushed the frontiers of technology. As the number of Member States grew from 12 to 21, and partnerships flourished with institutions across the globe, the World Wide Web was invented to allow an ever increasing number of scientists to share information. In keeping with one of the guiding principles of the Organization to share results as widely as possible, it was placed in the public domain in 1993. Likewise, the Grid was developed at CERN to harness the power of computers around the world in order to process the vast amounts of data collected through each of the Large Hadron Collider experiments. New detection techniques have transformed medical imagery and improved diagnostics.

Even before the Higgs boson was identified in 2012, CERN had changed our world. "Science flourishes through dialogue, through the interaction of peoples and cultures" said UNESCO Director General Irina Bokova in her opening address, as she and CERN Director General Rolf Heuer welcomed Ministers of Foreign Affairs, researchers and members of the international scientific community, as well as representatives of UNESCO, CERN, European Space Agency (ESA) and European Southern Observatory (ESO) Member States to the ceremony. "Science cooperation – indeed, science diplomacy – lies at the heart of our project to build a more just and equitable world."

She continued: "For me, CERN embodies the ‘one earth’ approach we need today to tackle global challenges – looking across borders, beyond ‘single nation’ solutions. UNESCO and CERN are taking forward this vision on the ground, through support to science education, digital libraries, with a special focus on women. CERN is more than a world-class research centre – it is a place where we are weaving together, thread by thread, the fabric of the intellectual and moral solidarity of humanity."

“CERN’s philosophy of openness and transparency is expressed in its Convention,” emphasized Rolf Heuer, Director-General of CERN. “CERN’s commitments, as laid down in the text, to carry out purely fundamental research and to make all of its work public, have made an important contribution to the Laboratory’s renown. These commitments have ensured peaceful collaboration between scientists from all countries.” This collaboration continued through the cold war, when CERN scientists worked with their Soviet and US counterparts. Today, the CERN community comprises 6,000 engineers and scientists from over 100 countries worldwide.

CERN has become a model for global cooperation and opened the way for other institutions that combine scientific excellence with Science Diplomacy. Ten years after its creation, the Abdus Salam International Centre for Theoretical Physics (ICTP) was established in Trieste, Italy, under the auspices of UNESCO, to advance scientific expertise in maths and physics in the developing world. ICTP has worked with 188 countries to date. The latest organization to follow in CERN’s footsteps is the International Centre for Synchrotron Light for Experimental Science and Applications in the Middle East (SESAME), an intergovernmental laboratory under construction in Jordan that is being developed under the auspices of UNESCO. It aims to foster scientific and technological excellence in the Middle East and neighbouring countries while building scientific and cultural bridges between diverse societies, and contribute to a culture of peace through international cooperation in science. The fact that Israeli and Palestinian scientists are already collaborating within the SESAME community is proof that science can be a common language.

This idea – building peace through science – was the focus of the celebration and the subject of a round table discussion with Alexei Grinbaum, researcher and philosopher of the French Atomic Energy and Alternative Energy Commission; Fernando Quevedo, Director of ICTP; Zehra Sayers, co-president of the scientific advisory committee of SESAME and Jan Van Den Biesen, vice-president of Philips Research R&D programmes.

A moving tribute was made to François de Rose, one of the founding fathers of CERN, who remained committed to the ideals embodied by the Organization until he died earlier this year. He followed CERN’s progress closely, and came for one last visit following the discovery of the Higgs Boson in 2013.

CERN and UNESCO have maintained close ties over the last 60 years, a relationship which has allowed them to cooperate on many projects, mainly in the field of education. At present, the two organisations are working together on projects to establish digital libraries in Africa and to train science teachers in developing countries.