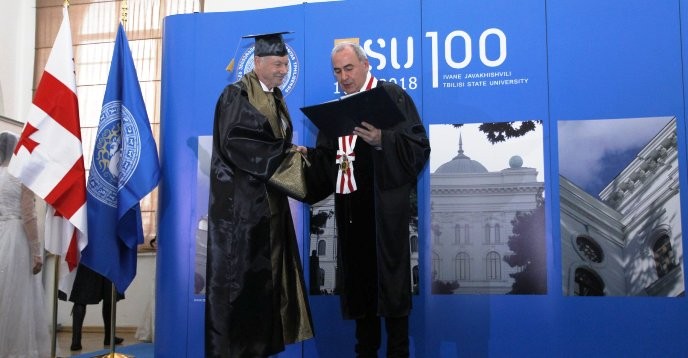 The year 2018 marks a century of the TSU’s foundation, the first higher education institution in Georgia and in the South Caucasus Region.  In commemoration of the anniversary of the Ivane Javakhishvili Tbilisi State University, a special government commission, led by the  Prime Minister of Georgia, has been set up to plan and organize marking events. Anniversary flags have been hoisted in the central streets of Tbilisi, on the Parliament building and Tbilisi International Airport. The TSU building façade, the Bridge of Peace and the Tbilisi Tower were illuminated in the TSU colors. The National Bank of Georgia (NBG) issued a collector coin to mark the 100th anniversary of the Ivane Javakhishvili Tbilisi State University (TSU).

On February 7-9, solemn events marking the 100th anniversary of the TSU launched the series of commemorative events that will last throughout the year.

The event brought together more than 100 university leaders, international organizations, students, professors, experts, policy makers, representatives of Georgian government and legislative authorities. Professors from different universities were awarded TSU Honorary Doctorates. Memorandums of Understanding and Letters of Intent were signed between universities. One of the major events was an international symposium “Perspectives of Higher Education: Revival of the Past and Thinking about the Future”, a platform to discuss full scope of cooperation, share good practices in higher education and to shape emerging higher education trends. The events were widely covered by mass media.

The events were a brilliant opportunity to promote UNESCO’s visibility, its core values and leading role towards implementation of the post-2015 Agenda to Sustainable Development on national and international levels. Ms. Audrey Azoulay, Director-General of UNESCO, in her letter of congratulation underlined the importance of the University in promoting ideals of equality and progress, its contribution to the regional social, economic and cultural activities.