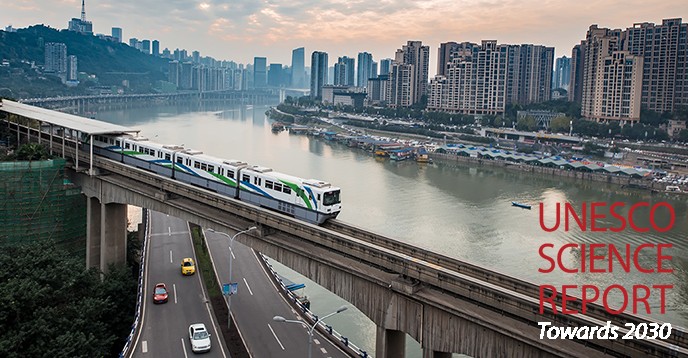 Between 2009 and 2013, China experienced a meteoric rise in research and development (R&D). Over this period, the country overtook the USA to count the greatest number of researchers of any single country and doubled its research spending (in RMB).

This trajectory is analysed by the UNESCO Science Report: towards 2030. Now, the case study of China from the report is available in Chinese, thanks to UNESCO’s co-publishing partner, the China Association of Science and Technology (CAST).

The UNESCO Science Report shows that, between 2007 and 2013, China increased its global share of research spending by 42%. It now contributes slightly more to global research expenditure (19.6%) than to the global population (19.3%).

Meanwhile, the number of Chinese researchers continues to rise. Since the release of the original English edition of the report in November 2015, China’s researcher density has climbed by 11%, from close to the world average[2] in 2013 (1 073) to 1 206 (2016) full-time equivalent researchers per million inhabitants in 2016, according to the UNESCO Institute for Statistics. Notwithstanding this, the USA, with its much smaller population, still has more than three times the researcher density of China, with 4 313 researchers per million inhabitants in 2015.

China was one of the drivers of global growth in research spending between 2007 and 2013. Global research spending actually progressed faster (+30.5%) than the global economy (+20.1%) between 2007 and 2013. This is because the business sector in developed countries deemed it vital for its competitiveness to maintain, or even augment, its level of investment in R&D during the recession, even as many governments adopted austerity budgets. As for China, it ‘managed to dodge the fallout from the 2008 recession but its economy was showing signs of strain’ by mid-2015.

‘China’s new political leadership has placed science, technology and innovation at the core of the reform of its economic system,’ observes the UNESCO Science Report, ‘as innovation can help not only with restructuring and transforming the economy but also with solving other challenges that China faces – from inclusive, harmonious and green development to an ageing society and the “middle income trap.”’

In September 2014, China’s State Council unveiled an Energy Development Strategy Action Plan to 2020 that fixes some stringent targets for the development of modern infrastructure. For instance, total annual coal consumption is to be capped at about 4.2 billion tons. As China burned 3.6 billion tons of coal in 2013, it can only increase its coal usage by about 17% by 2020 from 2013 levels. Chinese scientists and engineers have chalked up some outstanding achievements since 2011. For instance, Chang’e 3 became the first spacecraft, in December 2013, to land on the Moon since the Soviet Union’s craft in 1976. In January this year, Chang’e 4 clocked up a world first by landing successfully on the dark side of the Moon. China has also made breakthroughs in other areas, such as deep-ground drilling and supercomputing. Its first large passenger aircraft, the ARJ21-700 with a capacity for 95 passengers, was certified by the national Civil Aviation Administration in December 2014.

The aim is to turn China into an innovation-driven country by 2020. The blueprint for achieving this ambition is the National Medium- and Long-Term Plan for the Development of Science and Technology (2006–2020) and the innovation-driven development strategy issued by the Central Committee of the Chinese Communist Party and the State Council in 2016. To facilitate implementation of the National Medium- and Long-Term Plan, government ministries have designed policies to help build an enterprise-centred national innovation system: tax incentives for innovative enterprises, encouragement of assimilation and re-innovation based on imported technology, stronger protection of intellectual property rights, etc.

The goal of becoming an innovation-driven, modern country by 2020 has been compromised, however, by the continuing dependence of most Chinese enterprises on ‘foreign sources for core technologies’, affirms the UNESCO Science Report.

In 2015, the government launched its Made in China 2025 initiative to prioritize the development of cutting-edge high-tech industries. ‘The current political leadership wishes to reduce this dependence on foreign core technologies,’ observes the UNESCO Science Report. ‘The most recent illustration of the vulnerability of China’s high-tech industry is the case of the Chinese telecommunications giant ZTE’, observes Professor Cong Cao, a scholar of innovation studies at the University of Nottingham Ningbo China who authored the chapter in the UNESCO Science Report on China. ‘ZTE almost went bankrupt after being cut off from its American suppliers for key components last year’.

The Chinese political leadership has, itself, expressed some dissatisfaction with the performance of the domestic innovation system, observes the UNESCO Science Report. ‘Despite a massive injection of funds, better trained researchers and sophisticated equipment, few research results have been turned into innovative and competitive technology and products. The commercialization of public research results has been rendered difficult, if not impossible, by the fact that these results are considered public goods, thus disincentivizing researchers engaged in technology transfer.’

The share of basic research has, meanwhile, dropped from 6.0% to 4.7% of the total. In fact, expenditure on basic research has been lagging far behind the level of developed countries, having hovered around 5% over the past two decades, compared to about 17% in the USA and European Union. This has resulted in Chinese enterprises performing more than three-quarters of all research expenditure, since the public sector tends to be the main investor in basic research.

For Professor Cong Cao, ‘China’s political and scientific leadership has come to realize that the country’s pursuit of innovation could be in jeopardy without breakthroughs in basic research’. In February 2018, China announced the launch of the Chinese Institute for Brain Science, Beijing. It joins a small circle of countries investing heavily in this field, including the world’s three superpowers in science, the USA, European Union and Japan. A deep understanding of cognitive sciences is, of course, one of the pillars of artificial intelligence, one of China’s research priorities.

‘A new and very significant development is the merger of the National Natural Science Foundation of China (NSFC) into the Ministry of Science and Technology, announced at the National People’s Congress in March 2018’ says Professor Cong Cao. This has happened just four years after China’s national research programmes were reorganized into five streams, one of which was the NSFC, a reform discussed in the report. ‘Its implications for China’s R&D landscape, especially as concerns funding for basic science, will be felt in the coming years’, forecasts Professor Cong Cao.

The original English edition of the UNESCO Science Report: towards 2030 was launched at UNESCO headquarters on 10 November 2015.

The UNESCO Science Report tracks global trends in science governance every five years. The next edition is due for release on 10 November 2020.

[2] The world average for researcher intensity was 1 083 in 2013, according to the UNESCO Institute for Statistics.

Science for a Sustainable Future, Investing in Science, Technology and Innovation, Building Capacity in Science and Engineering
China