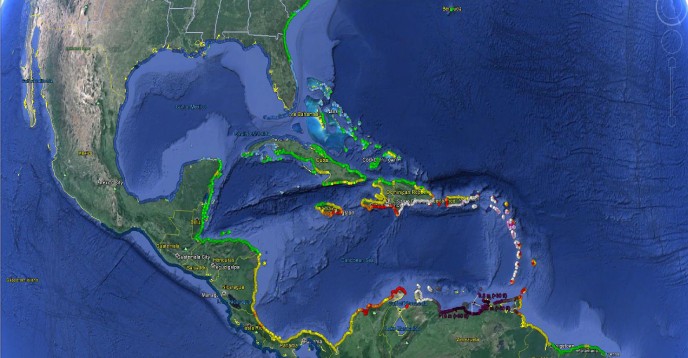 A tsunami early warning exercise will take place in the countries of the Caribbean Sea on 17 March. The purpose of the test is to identify possible weaknesses in the Tsunami and other Coastal Hazards Warning System for the Caribbean and Adjacent Regions, which was established in 2005 under the auspices of the Intergovernmental Oceanographic Commission of UNESCO (IOC-UNESCO).

The exercise will test a double scenario including a major earthquake off the coast of Venezuela and another off the northern coast of the Dominican Republic. It will feature fictitious messages sent by the Pacific Tsunami Warning Centre (PTWC) to the countries taking part in the exercise*.

Countries can choose to extend the test at the local level by disseminating the alert via sirens or loudspeakers.

Known as Caribe Wave 16, the exercise will test the effectiveness of early warning provisions involving those responsible for the management of emergencies in the region, including national Tsunami Warning Focal Points, weather forecast centres, national coast guard services, emergency relief services, etc. Nearly 70,000 people are involved in the exercise and countries will also be able to extend the test at the local level. Venezuela, the Dominican Republic, Porto Rico and Panama are planning to test their preparedness through an evacuation exercise for some of their coastal populations.

Over the last 500 years, 75 tsunamis have occurred in the Caribbean, nearly 10% of the worldwide total over the same period. Whether caused by earthquakes, landslides or volcanic activity, tsunamis have claimed more than 3,500 lives in the region since the middle of the 19th century (according to the U.S. National Oceanic and Atmospheric Administration, NOAA). The region has become ever more vulnerable to such risks due to massive population growth and the development of tourism in coastal areas.

The first tsunami warning exercise in the area took place in 2011. The Tsunami and other Coastal Hazards Warning System for the Caribbean and Adjacent Regions (ICG/CARIBE EWS) was established in 2005 replicating the models of the Pacific, Indian Ocean, Mediterranean and Northeast Atlantic systems. Created under the auspices of the IOC, the Intergovernmental Coordinating Groups help Member States establish tsunami warning and response systems.