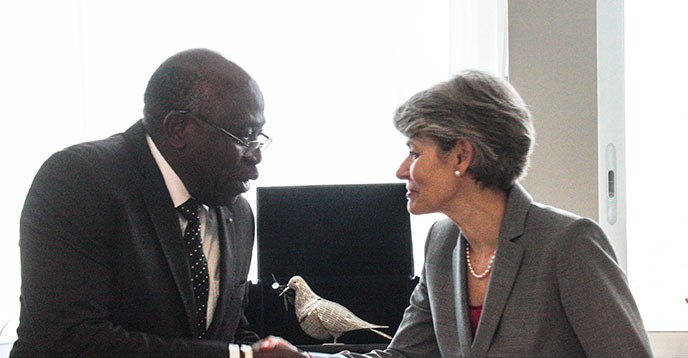 On 9 April, UNESCO Director-General Irina Bokova and the Minister for Secondary and Higher Education of Burkina Faso, Professor Moussa Ouattara, signed an agreement renewing the International Centre for Girls’ and Women’s Education in Africa (CIEFFA ) at UNESCO Headquarters in Paris.


Highlighting that the presence of Minister Ouattara reflects the commitment of Burkina Faso for the advancement of girls and women’s education, the Director-General welcomed the cooperation between UNESCO and CIEFFA over the past decade and underlined recent initiatives on training young people in the field of social entrepreneurship and a culture of peace, as well as early childhood care and education projects.

"I was able to see the dedication of the entire team during my visit to CIEFFA in February 2013, and to measure the scale of the task to meet the needs of girls and women in Africa. Talking about education is not enough -- without quality education, we will not reach the sustainable development we want. Progress is significant, but great challenges remain. The renewal of this agreement gives us the opportunity to work together in your country and at the regional level for equal opportunities."

The Minister stated that "Burkina Faso has made the fulfillment of young girls a founding principal," noting that the visit of the Director-General carried a strong message about the "power of girls and women’s education to eliminate poverty and to achieve peace and sustainable development."  He also announced a Government project to open a scientific boarding school only for girls, which will also provide training for teachers, indicating that this institution could be located alongside CIEFFA. Another example of clear support for girls’ education is the recent creation of 300 scholarships for girls who have graduated from high school.

The Director-General strongly encouraged strengthened cooperation to promote scientific and technical education for girls and women as well as non-formal education for young girls who are out-of-school or who have dropped out. "These are major areas of action for empowerment, access to better jobs and their full participation in the development of their societies." She also welcomed the commitment of President Compaoré and First Lady Chantal Compaoré, referring to the latter's participation in the Commission on the Status of Women in New York last March, and her advocacy against female genital mutilation as well as her efforts  to raise awareness through the secondary education curriculum.

CIEFFA was recognized as a UNESCO Category 2 Centre at the 33rd session of the General Conference in 2005. Its actions include advocacy, capacity building, and the production of tools and teaching guides.