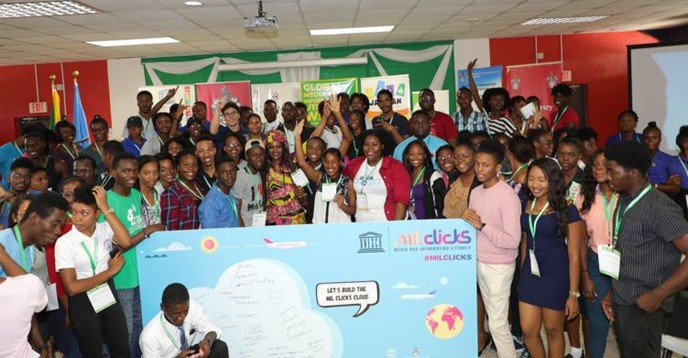 The Global Media and Information Literacy (MIL) Week 2017 Youth Agenda Forum took place on 24 October 2017, at the Caribbean School of Media and Communication of the University of the West Indies, Mona, in Kingston, Jamaica.

As part of the Global MIL Week 2017 Feature Conference, the Youth Agenda put an emphasis on the role of youth leaders to promote critical civic engagement via MIL. It gathered close to 250 local and international participants from different regions of the world.

Youth leaders from over 10 countries, including social media influencers, young entrepreneurs, leaders of youth organizations, local young journalists and students, shared their life experience related to MIL, as well as their understanding on MIL, through sofa-talk style panel discussions. Inspiring speeches stimulated active interaction among participants. Chair of the GAPMIL Youth Committee, Adama Lee Bah was among the presenters. She shared about the important role of the media information systems as advocacy tools.

One highlight of the Youth Agenda was the session “Building the MIL CLICKS Cloud”. The UNESCO representatives, Alton Grizzle, Programme Specialist and Xu Jing led this session. The near 250 youth were accompanied through four movements: introduction of the “cloud” community, awareness raising on MIL, engagement, and commitment. Participants were in unison as they sang to the tune of Bob Marley, “emancipate yourselves from mental slavery, none but yourselves can free your minds”. They reflected on what this meant to them personally in the context of MIL.

A key outcome of the Global MIL Week Youth Agenda Forum came in the fourth movement. All participants received the MIL CLICKS Pact, which is a self-commitment to engage in critical thinking and influencing their peers in this regard online and offline. The MIL CLICKS PACT was crafted with youth themselves in dialogue with UNESCO. Participants voluntarily declared the statement, “I am a MIL CLICKER, I pledge to REVIEW before I click, post, and share.”

One of the adult participants present was moved by the MIL CLICKS Pact experience. Mr Jamal Eddine Naji, Director-General for Audiovisual Communication, High Authority of Audiovisual Communication, Morocco showed an immediate demonstration of engagement and commitment, He committed to translating and circulating the MIL PACT in Arabic, French, and Spanish. They were available 24 hours later. Follow the UNESCO website for other language versions.

Download and share the Arabic, English, French, and Spanish versions. In addition, engage further by contacting UNESCO if you can translate the MIL CLICKS PACT in your local language.

The afternoon sessions of the Youth Agenda were comprised of hands-on sessions, which covered 3 important topics of the conference: MIL revolutionizing the learning process, MIL stimulating critical civic engagement in democracy through empowerment, and MIL for social inclusion, dialogue, growth and development. “These sessions have helped me to have a greater appreciation for MIL and I feel inspired to share this message with other young people”, said Kenloy Smith, a participant in the Youth Agenda Forum.

A video contest was launched in the framework of the Youth Agenda. Over 10 entries were received and 3 were finally selected by the organizing committee of the Youth Agenda.  The piece, “Yuh Competent?” (Are you competent?) received the highest accolades. It was chanted at different intervals of the forum.

It was one way of asking the participants if they were competent in accessing, creating, interpreting and sharing credible and reliable information and media content. You can find “Yuh Competent” on YouTube. CLICK and share so that it can go viral!

The various sessions were linked up by performances from local young artists, including flutists, singers, and school choir.

UNESCO thanks the GAPMIL Youth Sub-Committee, the University of the West Indies, the Broadcasting Commission of Jamaica and all other partners that contributed to the success of the Global MIL Week Youth Forum Agenda.