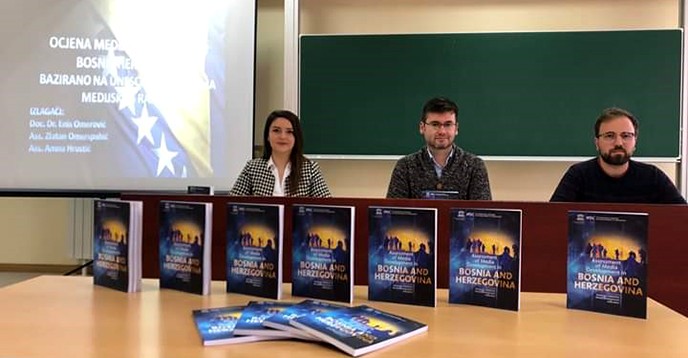 The launch event of Assessment of Media Development in Bosnia and Herzegovina on 29 November 2019 at the Law Faculty of University of Zenica.
© Center for Media Law Sarajevo

UNESCO has just released a new publication on the media landscape in Bosnia and Herzegovina (BiH), making it a unique reference guide for national stakeholders in addressing challenges towards a free, independent and professional media environment.

Structured around UNESCO’s Media Development Indicators (MDIs), the publication examines the current media environment in BiH in five main areas: legal and regulatory framework; pluralism and diversity; the role of the media as a platform for democratic discourse; professional training and technical infrastructure to support independent and pluralistic media.

According to Kristina Ćendić, project coordinator of the CML, the release of the publication is more important than ever, especially during this time when there is an increased debate on how digital media are increasingly taking the role of legacy media in the country.

“The recommendations proposed in the study could in the long-term mitigate the risks of a lack of digital literacy that affects public opinion and allows for instant spread of inaccurate information and propaganda,” said Ćendić, who is also one of the authors of the publication.

“It is hoped that the publication will become part of the curriculum for the Law Faculty, as a first step towards developing an exclusive course on media law and policy.”

Following the initial launch, a series of promotional activities have been taking place to ensure the outreach of the study, including the organization of launching events in several major cities in BiH and the establishment of cooperation agreements with different institutions.

“We expect that the relevant government authorities, representatives of the civil society, academia, technical communities and private sector will respond to the recommendations from their respective areas of expertise and will contribute to building a solid media landscape that serves all people in the country without exceptions,” Ćendić said.

UNESCO’s MDIs were developed and endorsed by the Intergovernmental Council of IPDC in 2008. Since then, they have become one of IPDC’s flagship initiatives and have been applied in nearly 40 countries.

The MDI assessment of Bosnia and Herzegovina is available for download here: https://unesdoc.unesco.org/ark:/48223/pf0000371223

Communication and Information, Fostering Freedom of Expression, Media Development and the IPDC
Bosnia and Herzegovina