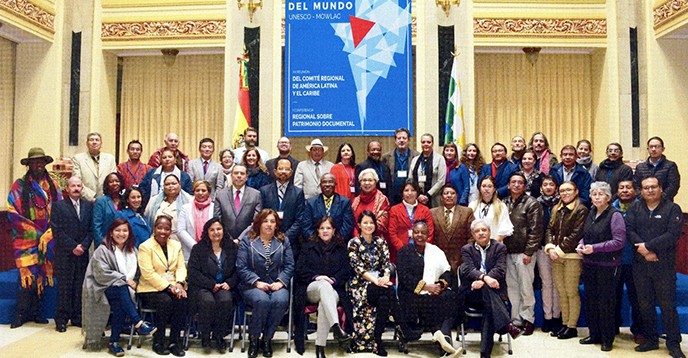 The Vice-President of the Plurinational State of Bolivia, Mr Álvaro García Linera, and the Minister of State for Culture and Tourism, Ms Wilma Alanoca Mamani, joined more than 40 experts in documentary heritage and officials from National Commissions for UNESCO, from 28 countries in Latin America, the Caribbean and Asia-Pacific, in the signing of the Letter of the City of La Paz.

The Letter summarizes three days of intense discussions on the future of the Memory of the World (MoW) Programme, particularly in light of the implementation of the UNESCO 2015 Recommendation concerning the Preservation of, and Access to, Documentary Heritage Including in Digital Form.

Held from 11 to 13 September in La Paz, the capital city of the Government of the Plurinational State of Bolivia, the meeting is the twentieth in the series of such meetings organized by the MoW Regional Committee for Latin America and the Caribbean (MOWLAC).

The meeting served to deepen ongoing discussion on two key themes for the protection and promotion of documentary heritage: the management of natural risks and those caused by human action as well as the preservation of digital documentary heritage.

Another key feature of the meeting was the election of new office-bearers for MOWLAC. These include:

This meeting was made possible thanks to the generous support of the Japanese Funds in Trust (JFIT) and of other partners.

UNESCO launched the MoW Programme in 1992 to guard against collective amnesia through the preservation of valuable archive holdings and library collections all over the world. In so doing, the programme also ensures wider access to such heritage. The programme is thus intended to protect documentary heritage, and to help networks of experts to exchange information and raise resources for the preservation of, and universal access to, such documentary heritage.