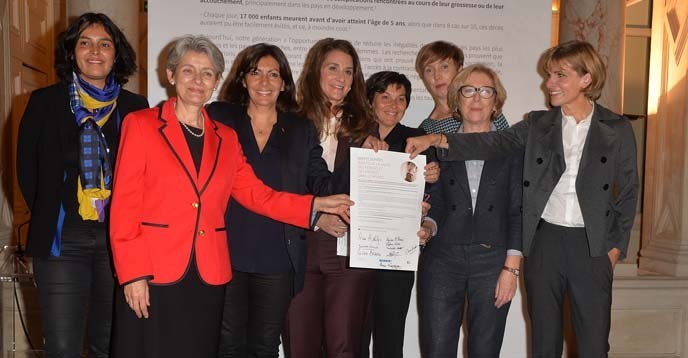 All signatories, including several French State Secretaries, the President of the French NGO Action Against Hunger and partners from the private sector underlined the pivotal role of education to improve child and maternal health.

“We cannot invest in health without investing in education, and most importantly in girls’ education,” stated the Director-General, citing figures to make the case. More than 1 million lives could be saved each year if all women finished primary education, a figure that increases to 3 million if they benefited from secondary education.

Estimates show that if all women finished primary school, maternal mortality would drop by a staggering 66%. “Keeping girls in school means avoiding early marriages and saving lives. This is the best way we have to improve health,” she said.

Melinda Gates stressed the need for gender to be at the centre of all development action. “If we don’t invest in girls’ and women’s empowerment, we are missing huge opportunities,” whether in agriculture, nutrition or health. The Gates Foundation has launched a new programme to place girls’ and women at the heart of all its programming.

“Acting to improve the health of women and children is a fight that we stand ready to carry together,” said Mayor Anne Hidalgo. She cited the influential role of networks, such as the Association of Mayors of Francophone Cities and the Network of Elected Women. “Education must be a key factor because without education, there can be no sustainable health,” she affirmed.

How can we get this message across? “We must speak about women as agents of change instead of being victims. We need powerful storytelling that resonates with the public,” said Mrs Gates   “With the right tools, women can lift their families, their communities and build more peaceful societies and democracies. We must help them develop their potential. ”

Also referring to the health-education nexus, Annick Girardin, Secretary of State for Development and Francophonie, affirmed France’s ambition to bring French aid in line with these challenges, by focusing on the least developed countries and the most disadvantaged population groups.

Each day, 800 women die due to complications in pregnancy or child-bearing, and 17,000 children die every day before reaching age 5.

The Paris appeal is a commitment to make the fight against child and maternal mortality a priority, by increasing spending on access to interventions that have proven their effectiveness, including vaccinations, prevention and treatment of infectious diseases, and access to family planning.

The Ebola crisis was widely evoked during a round table preceding the signature, with attention drawn to the need for investment in primary health care systems, sensitivity to the cultural context, and the training of health personnel.