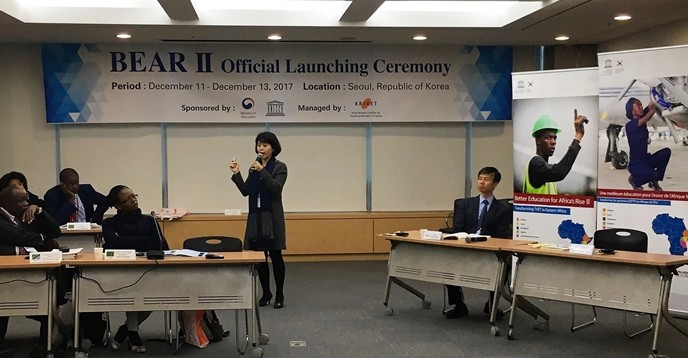 UNESCO has officially launched the second phase of the UNESCO-Korea Funds-in-Trust (KFIT) project Better Education for Africa’s Rise project (BEAR II) which over the next four years will focus on strengthening technical and vocational education and training (TVET) systems in five beneficiary countries in the Eastern African region: Ethiopia, Kenya, Madagascar, Uganda and the United Republic of Tanzania.

More than 30 participants joined the the three-day project launch workshop organised in cooperation with the Korean Ministry of Education which took place on 11-13 December 2017 at the Agro-Fisheries & Food Trade (aT) Center in Seoul, Republic of Korea.

The launch event officially marked the beginning of the inception phase of the BEAR II project, a few months after concluding the validation workshops in each of the beneficiary countries, where key activities and targeted economic sectors were agreed upon.

The BEAR II project will strengthen TVET systems by focusing on the following sectors in each of the beneficiary countries: the agro-processing sector in Ethiopia; environmental technology in Kenya; the textiles industry in Madagascar; post-harvest management and agro food processing in Uganda; and agribusiness and creative industries in the United Republic of Tanzania.

About the BEAR II project

In alignment with the Sustainable Development Goal on Education and the Education 2030 Framework for Action, the BEAR II project aims at strengthening TVET systems in the Eastern African countries to give young people a better chance to access decent employment and generate self-employment.

In close collaboration with governments, civil societies and TVET institutions in each country, and through specific sectoral interventions in each of the beneficiary countries, the project aims to reshape TVET systems  by supporting governments’ and the private sector’s efforts in updating curricula, training teaching staff, promoting evidence-based policy-making, and engaging employers and enterprises.

The BEAR project also contributes to the global efforts for achieving SDG4 particularly TVET targets, implementing the Continental Education Strategy for Africa 2016 – 2025 and the UNESCO Strategy for TVET 2016 – 2021, following the recommendations of the Mahe Process, 2016.