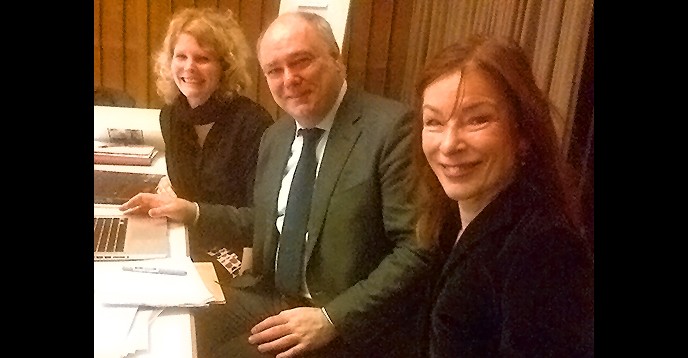 Unpacking the complexity of contemporary free speech on the Internet was the business of a workshop in Berlin this week, organized by the German Commission for UNESCO and the Hans-Bredow-Institute. Thirty international participants from academia, industry, governments, NGOs and intergovernmental groups brainstormed ideas that will be compiled into a publication during 2014.


A common insight of the discussion was the need to apply a broader perspective to digital freedom of expression, because of the multiple dimensions of communication online.

Participants noted that standards on matters like privacy, Internet neutrality and copyright would have impacts upon online freedom of expression. A number of speakers referred to the draft UNESCO concept of Internet Universality as a useful framework to conceptualise “overspill effects” between the different dimensions of the internet.

Moderating the discussion were Guy Berger, Director of Freedom of Expression and Media Development at UNESCO, and the Hans-Bredow Institute’s Wolfgang Schutz, who is also UNESCO Chair of Freedom of Communication and Information at the University of Hamburg.

The discussants identified more than 20 current challenges to digital freedom of expression. These ranged from the digital divide, through to arbitrary blocking and filtering of content, and illegitimate espionage. They also included:

It was also noted that there was also little knowledge about issues such as as how freedom of expression online correlated with innovation and social participation.

Participants drew attention to policy- and standard-building processes  underway within individual companies such as Google, as well as in the Global Network Initiative which includes major Internet intermediary companies among its members.

The European Court of Human Rights was cited as a field where decisions being made had relevance for standards of free speech online.

Participants debated whether the elaboration of standards in various online fields would help or hinder freedom of expression, and they also registered distinctions between bottom-up and top-down processes, and between voluntary and mandatory standards.

The workshop concluded with a call for discussion about the broader relationship between standards, principles, practices and values. Also proposed for a future agenda was  designing principles for the development of standards, such as innovation, inter-operability and transparency.

It was suggested that UNESCO should act as a clearing house for case studies on conflicts and best practices concerning issues of online freedom of expression.

Amongst the participants were Dunja Mijatovic, Representative on Freedom of the Media for the Organization for Security and Co-operation in Europe (OSCE), and Dirk Brengelmann, Commissioner for International Cyber Policy in the German government.