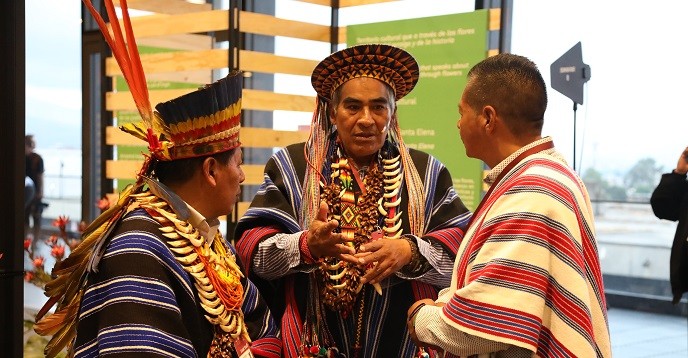 Colombia’s President Iván Duque Márquez and UNESCO Director-General Audrey Azoulay were among more than 1,000 participants who attended the opening on 9 December of the 14th session of the Committee for the Safeguarding of the Intangible Cultural Heritage taking place in the Colombian capital under the chair of María Claudia López Sorzano, until 14 December.

Performers from the Carnival of Barranquilla, inscribed on UNESCO’s Representative List of the Intangible Cultural Heritage of Humanity in 2008, escorted delegates to the auditorium where the opening ceremony took place, before the Corbandas symphony orchestra performed a programme of cumbia, fandango and merengue carranguero music.

In her speech, Ms Audrey Azoulay said that since its entry into force in 2006, the Convention for the Safeguarding of the Intangible Cultural Heritage “has been made stronger through the dissemination of an ambitious vision of heritage, the idea of a living legacy that integrates practices, experiences, techniques and human knowledge nurtured over generations […] These expressions, stories, crafts, dances, music, costumes and rituals express the wealth of our humanity,” added Ms Azoulay. “It is not a question of protecting them as mere fragile memories, but of safeguarding their full present vivacity, which offers us countless possibilities in facing contemporary challenges.”

President Duque for his part highlighted the fact that the meeting in Bogotá was the first Committee session to take place in the Latin America and Caribbean region. The President pleaded for the democratization of culture, which he defined as “that which is rooted in feelings and principles. […] that which becomes a tradition that evolves year after year. But culture is also a living expression of humanism, that which distinguishes us and allows us to coexist with nature and becomes a legacy of wisdom with the passing of time ...” The President added that “The world today needs more culture and more humanism.”