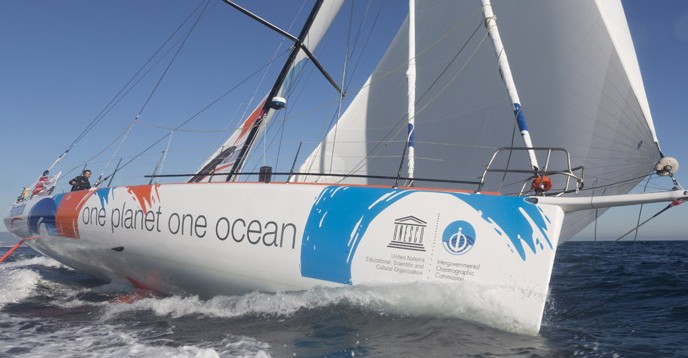 Today is Argo Day for the skippers competing in the Barcelona World Race. The crews participating in the only double-handed, non-stop, unassisted race around the world will each deploy an Argo float in support of international ocean monitoring efforts to improve our understanding of the ocean system and climate change. The 3rd edition of the Barcelona World Race, a lap of the globe starting and finishing in Barcelona (Spain), kicked off on 31 December 2014. This is an extreme sporting challenge and ocean adventure that puts human limits to the test. It is also the only high-level race that translates a commitment to ocean protection into action.

The Argo programme allows scientists to look below the surface, providing a profile of the temperature and salinity of the ocean using a global array of over 3,500 profiling floats that are moving up and down in the water column from the surface to a depth of 2,000m. Argo makes visible large-scale ocean and climate features and processes that were once hidden to scientists. The network has enabled new revelations about ocean dynamics that are helping society understand and forecast global climate. Maintaining this network is very challenging and requires 1,000 deployments per year. The 8 floats were funded by Coriolis (France). This generous support and the crews’ willingness to take a float on board and deploy them where they are most needed are an invaluable contribution.

JCOMMOPS* specialists, who coordinate the maintenance of the network and initiated this innovative partnership, have been following the race very closely to choose the best day: today, the weather conditions allow for a safe launch, and the position of the boats is optimal to deploy floats in remote areas where there is little coverage, and consequently little data. The leaders of this tight race, Cheminées Poujoulat, Neutrogena and GAES Centros Auditivos, are well below 34°S – the latitude of the Cape of Good Hope, in the so-called “Roaring Forties”, with the other boats spread out between 20°S and 32°S. Their positions allow for deployments in excellent locations for the Argo programme. The skippers were trained ahead of the race to activate and deploy the floats properly and will be sending information, videos and photos of the deployments throughout the day.

One of the floats had to be deployed early, when pre-race favourites Alex Thomson and Pepe Ribes on their IMOCA 60 Hugo Boss were dismasted on 14 January. The duo had led the Barcelona World Race since the beginning, set a new record in the Mediterranean for the passage from Barcelona to Gibraltar and a course record to the Equator. Nevertheless they were able to deploy their float after the incident in a valuable position, before changing course and heading for Brazil. The float successfully sent first confirmation data to shore before beginning its first 10-day dive.

Skippers spent a day with JCOMMOPS coordinators to familiarize themselves with the Argo floats and the scientific programme before the race. © Barcelona World Race / Jorge Andreu

As a novel, global data source Argo has also become a central element in operational oceanography and in basic research and has great value in education. High school students, university undergraduates, graduate students, and postdoctoral investigators can all use Argo from their desktops to explore the global ocean and its evolution. All Argo data are freely and publically available in near real-time. Starting tomorrow, you can follow the floats, as well as the race!

This is not the only contribution these adventurers are making for science during the race. The Race and skippers are translating their commitment to ocean protection into action by contributing to three other scientific projects through a partnership between the Intergovernmental Oceanographic Commission of UNESCO and the Barcelona Foundation for Ocean Sailing. Each crew will collect data on surface temperatures and salinity, as well as meteorological data as their routes take them to remote areas where very little data is available, to be analysed by international ocean research networks such as the Global Ocean Observing System (GOOS).

A very special boat, which takes its name after the Intergovernmental Oceanographic Commission of UNESCO’s motto “One Planet One Ocean” and sponsor Pharmaton, is also collecting samples of micro-plastic pollution and serves as a platform for environmental awareness, in addition to the scientific contributions made by every crew competing in the race.

You can track their progress live and get daily updates from the crews.

* JCOMMOPS: the in situ Observations Programme Support Centre of the Joint WMO/IOC-UNESCO Technical Commission for Oceanography and Marine Meteorology

The boats taking part in the regatta will release Argo floats at different locations in the Southern hemisphere. The float is 1.70 m high and weighs 22 kg; it will be used to collect highly accurate temperature and salinity data from depths of 2,000 m up to the sea's surface. The information collected is then transmitted via satellite to be analysed by international ocean research networks. This data is crucial for oceanographers studying the behavior of vast areas of seawater, which is key in the bid to understand the evolution of the planet's climate.

The Citclops project was set up to retrieve and use data on seawater color, transparency and fluorescence to determine its quality and above all the effect on plankton. Cameras on each of the 8 IMOCA 60 vessels participating in the race will send data for areas where data has so far been scarce, along their route.

This is the continuation of a project that began during the previous edition of the race with the boat Fòrum Marítim Català. The objective is to collect invaluable data on salinity and temperature levels for surface seawater in rarely sailed areas, far from common shipping routes, for which data is scarce. The data will be collected by the boat One Planet, One Ocean & Pharmaton.

A device installed on the boat One Planet, One Ocean & Pharmaton will detect the level of microplastics in the seawater. These harmful particles affect the biological cycles of many species that ingest them, and their presence in the ocean is increasing. A system of filters and test tubes will collect and measure the particles, then send out the data via satellite. The project aims to collect data, but also to raise environmental awareness, thus contributing to the educational programme of the Barcelona World Race.

Addressing Climate Change, One Planet, One Ocean, Monitoring the Ocean