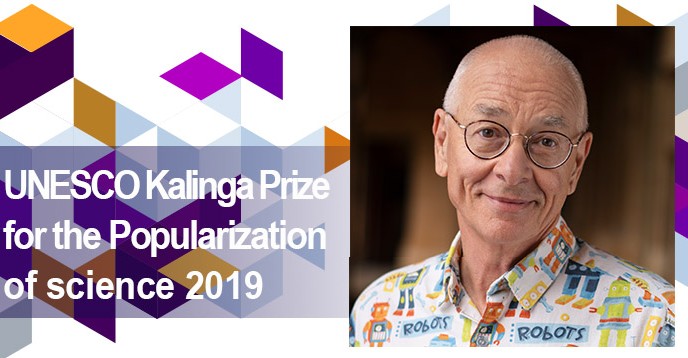 Paris, 17 November—UNESCO Director-General Audrey Azoulay will award the UNESCO Kalinga Prize for the Popularization of Science to Karl Kruszelnicki (Australia) on 20 November, at the World Science Forum in Budapest, Hungary.

An independent jury selected Karl Kruszelnicki in recognition of his longstanding commitment to fire up people’s curiosity for science and share his passion for the subject. “Dr Karl” has been a science communicator for over 30 years, using television, radio, podcasts, print media, books and social media to make science accessible to all. He is best known for his longstanding collaboration with ABC Radio (Australia) and BBC Radio 5 Live (UK) and for television shows Quantum and Sleek Geeks (both on ABC television).

Convinced that understanding science is essential to empower people, he has published 45 science popularization books, and is generous with his time for public engagements, particularly weekly Q&A sessions with schools around the world.

Dr Karl has university degrees in mathematics and physics, biomedical engineering, as well as medicine and surgery and has worked in all of these fields. He has also studied electrical engineering, astrophysics, computer science and philosophy “to fill in gaps in his education.” He has been the Julius Sumner Miller Fellow at the University of Sydney in the School of Physics since 1995, specifically charged with popularizing science.

The UNESCO Kalinga Prize for the Popularization of Science was created by UNESCO in 1951 thanks to a donation by Patnaik Bijoyanand, Founding President of the Kalinga Foundation Trust of India. Awarded every two years, the Prize is now also sponsored by the Government of India through the Department of Science and Technology, and the Odisha State Government. The laureate receive a $40,000 prize, a diploma and the UNESCO Albert Einstein Medal. The purpose of the Prize is to reward outstanding contributions in communicating science and technology to society.

Science for a Sustainable Future, Investing in Science, Technology and Innovation, Building Capacity in Science and Engineering, Science for Society
Australia, India, United Kingdom of Great Britain and Northern Ireland