Choreographer Taigué Ahmed during a training workshop in Chad © AAD-fund

The purpose of “Art-Lab Talks” is to document the transformative power of the arts for vulnerable populations involved in artistic creations.

The “Talks” is a series of web articles selected from a large collection of ethical practices identified by the Art-Lab Platform consisting of “artivists”, i.e. artists, heads of cultural institutions, practitioners, journalists, and researchers, committed to supporting people whose human rights are being violated.

On a monthly basis, the focus will be on a specific group of underprivileged people suffering from exclusion (refugees, migrants, people living in post-conflict zones, and the most marginalized).

A list of “ethical principles” for putting the concerns of the vulnerable groups at the core of artistic practices has been identified based on these “Talks”, to help them to escape from their current predicament, and to convey their claims for human rights and dignity. These principles will be disseminated within the framework of Art-Lab in order to root them at the core of humanitarian programmes ensuring that those who are left behind are actively considered as participants in the achievement of the SDGs.

In Africa, choreographers have set up workshops to help refugees regain hope and dignity through physical expression.

The idea behind the Refugees on the Move (ROM) programme, which started in 2011, in Chad, is to use dance as a tool for social and cultural mediation in refugee camps in sub-Saharan Africa. Started by the African Artists for Development (AAD) endowment fund in partnership with the Office of the United Nations High Commissioner for Refugees (UNHCR), the programme has several objectives, including helping to restore refugees' self-esteem, reducing violence in the camps, creating links with local populations through dance and physical expression, and collaboratively creating original contemporary works.

Chadian choreographer Taïgué Ahmed knows something of the transformative power of dance. Raised in war-torn Chad and forcibly conscripted into the army at the age of 22, he was introduced to dance as a teenager and readily acknowledges that the art form has enabled him to channel the violence he has experienced. He has since become a professional dancer and choreographer. While he was training at the Centre national de la danse in Paris, in 2009, he told the story, through his first solo dance performance, Crache mon histoire (Spit My Story) of how dance helps war victims to regain their self-esteem. It was on this occasion that the team behind the AAD fund discovered him and became interested in his approach.

“I have always believed in the power of dance to express trauma,” said Ahmed, adding that “even if they don't understand, the audience listens and the dancers are free to evacuate their pain and trauma through movement”. Kelly T. Clements, United Nations Deputy High Commissioner for Refugees, at the 2018 Art Stands with Refugees event in Basel, Switzerland, said: “Art enables refugees to communicate the unthinkable, the unbearable to others. Art allows refugees to convert their drama and their losses into words, colours or movements – so that their plight does not overwhelm them, and destroy what is still alive”. 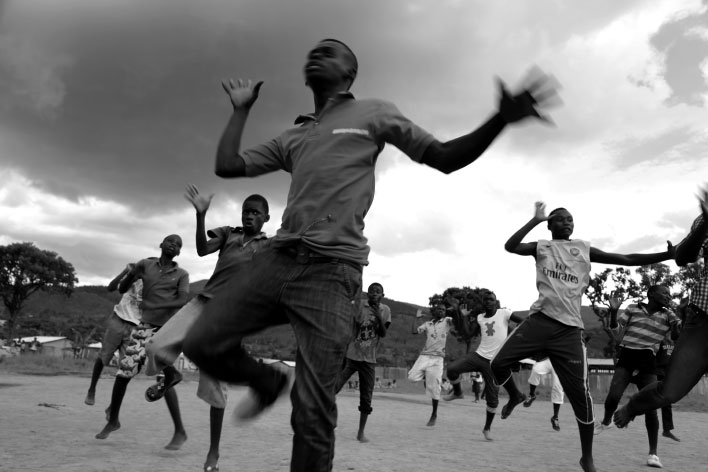 In 2005, when there were already 12 refugee camps in Chad, Taïgué Ahmed wondered whether it would be possible to “reawaken the bodies and souls of those who lived through the war”. Thus, the idea for the dance in the camps project was born, explained Ahmed during an Art-Lab dialogue with international artists on human rights, organized by UNESCO in partnership with the Chaillot National Theatre of Dance in Paris. For Ahmed, “dancing is a form of healing; the idea is for traumatized people to look after their bodies, to encourage them to dance, be in rhythm, become physically tired in order to promote sleep, listen to the drum and regain their culture”.

He then created the Ndam Se Na association, which means “let's dance together” in the Ngambai language. After convincing the UNHCR office in N'Djamena of the merits of his approach, he organized a three-month internship in 2006 in central African refugee camps in southern Chad. He lay the groundwork of cultural mediation which was later refined and has proven its ability to help people to get in touch with their inner selves, heal their bodies and regain their confidence. From the outset, the project was intended to provide an outlet for dancers, entertainment for non-participating refugees, and to be used as an awareness-raising tool.

Dance, however, was not a priority for the UNHCR team in Gore, which was in charge of managing the camps and concerned more about the urgent need to provide care and food to the refugees who had been traumatized by the violence. Nor was it a priority for the refugees, who were distrustful and tended to move around the camp armed with sticks and knives. Little by little, however, the magic worked: weapons were put away, ethnic barriers were broken down, the message got through, trust was established and smiles lit up faces again. The joy of regaining dignity was obvious. Taïgué had won his bet.

Based on this founding experience, the AAD fund team created the Refugees on the Move programme, with “the idea of working on reclaiming one's own body as an individual, and interacting with other bodies”, in order to “enable refugees to imagine a new way of living together”, explained Gervanne Leridon, co-founder of AAD fund. Each programme, which lasts three months, ends with a final performance, “a choreographic creation through which the refugees symbolically shed their refugee status”, says Jean-Michel Champault, artistic general delegate of the AAD fund. 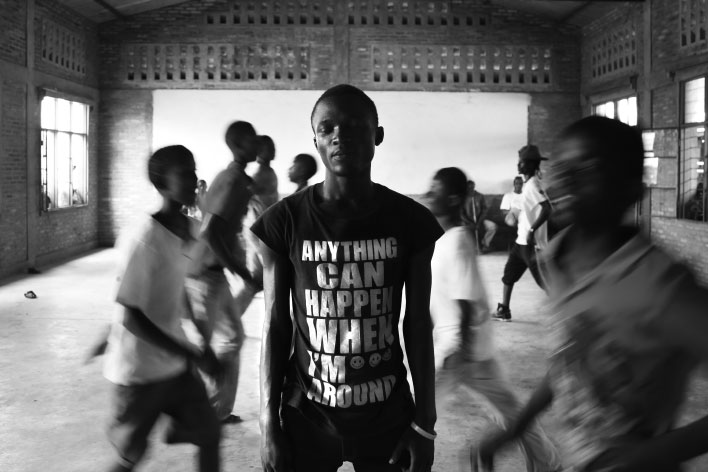 The pilot project was launched in 2011, in the Moula and Yaroungou refugee camps in southern Chad. The AAD fund created a relay system between artists, and Taïgué Ahmed trained another choreographer, Boniface Watanga from the Central African Republic. The latter worked in 2013 in the Batalimo refugee camp, east of Bangui, where he trained choreographer Ciza Muhirwa, who in turn worked in the Bwagiriza camp in Burundi in 2013 and 2014. The AAD fund, the artists and the UNHCR have adapted the pedagogical aspects to reflect the realities of the camps, where refugees often have to stay several years before being able to return home, causing discouragement, tension and violence.

Refugees on the Move then went to Burkina Faso in 2014 and 2015, with choreographer Salia Sanou, who had heard a lot about the project from Taïgué Ahmed. Originating from Burkina Faso himself, Salia Sanou had already worked with vulnerable populations, setting up in Ouagadougou in his La Termitière centre for choreographic development (CDC) the “I dance therefore I am” project for young people from difficult neighbourhoods who were failing at school.

What struck him first in the Saag-Nioniogo camp near the capital, and then in the Mentao camp on the northern border with Mali, was the “quasi-military organization of the camp”. While agreeing that this type of organization is necessary to avoid violence, Salia Sanou wanted to restore the part of humanism that was missing “so that people can live with hope for a better future”. He created three workshops for the Malian refugees, including artistic development for children and dance and music for adults. Discussion after the workshops and songs also provide an opportunity, in all Refugees on the Move programmes, to raise awareness among refugees about non-violence, early marriage, HIV prevention and hygiene.

“Going to these places means questioning the state of the world and understanding it differently. It also means creating the desire for new horizons,” says Salia Sanou, who divides his time between the CDC in Ouagadougou, where he welcomes and trains refugees aspiring to become professionals, and Montpellier, in the south of France, where he founded the Mouvements perpétuels dance company in 2010. In 2016, commissioned by the AAD fund and the Chaillot – National Theatre of Dance, and in co-production with Chaillot, he created Du Désir d’horizons (Desire for Horizons), “inspired by the states of the body, spaces and atmospheres experienced during dance workshops conducted in the refugee camps of Burundi and Burkina Faso”. He also passed on the baton to Democratic Republic of the Congo (DRC) choreographer Fabrice Don de Dieu Bwabulamutima.

In the Molé camp (DRC), in 2016, Fabrice Don de Dieu adapted Refugees on the Move workshops for refugees from the Central African Republic: a “majorette class” for children and a modern dance workshop for girls, because he wanted “the girls to work together and discuss issues of sexuality; in the Central African Republic, children marry very young”. With his Kongo Drama Company, he also set up a mixed hip hop workshop, a theatre and movement workshop, a traditional dance class “with the idea of working on the mixing of Central African and Congolese cultures and living better with the indigenous people” and finally a choir, enabling participants to write songs, including one calling for peace.

As the local UNHCR team found, participation by the refugees was remarkable and involved all age groups. When the artists arrived in the Molé camp, the rate of violence was 76%. “When we left, the indicators were 16%,” said Fabrice, who has no hesitation in describing this artistic commitment as “saving humanity”. In view of this success, UNHCR and the AAD fund asked him to become involved in another camp in the DRC, in Inke, where he worked extensively in 2018 on the issue of peaceful cohabitation between refugees and local communities. Proud of those results and moved by the joy and hope he had been able to inspire, he launched a programme in the camps on positive movement to start afresh, recalling that the right to culture was enshrined in the Universal Declaration of Human Rights.

The COVID-19 pandemic has put these ambitions on hold along with the new Refugees on the Move activities launched in Chad in February 2020 by the AAD fund with Taïgué Ahmed, in the Dar Es Salam camp near Baga Sola, which hosts refugees from several countries fleeing Boko Haram. The unifying force that is dance sometimes remains in the camps even after the artists have left. They train trainers among the refugees to maintain the activities. Taïgué Ahmed believes that this project has had a great impact on several refugee camps: “By dancing, playing and singing, these marginalized and categorized people recover their identities, their smiles, their joy for life and even, for some, a new meaning to their lives.”

Article by Laurence Rizet for the UNESCO Art Lab for Human Rights and Dialogue.

Art-Lab Talks are part of the Art-Lab for Human Rights and Dialogue programme. This is a UNESCO initiative which aims at mainstreaming the arts and culture across humanitarian and development programmes. It aims to highlight the crucial role of artists in defending human and cultural rights, and is currently coordinating a literature review on existing policies, alternative voices to the dominant cultural narrative, ethical practices and charters that promote human rights and inclusion of the most vulnerable through the arts.

The recommendations of this review were presented during a virtual event organized by UNESCO on 10 December 2020, in commemoration of the Universal Declaration of Human Rights - adopted in 1948 by the United Nations General Assembly.

Under the umbrella of the International Decade for the Rapprochement of Cultures (2013-2022), Art-Lab participates in spearheading global efforts to leverage dialogue for development and peace.

Through a comprehensive programme of coordination, research, capacity-building and advocacy, Art-Lab underscores UNESCO’s role as the leading authority on intercultural cooperation for peace.

Art-Lab’s ambition is to consolidate a portfolio of ethical practices; produce training tools for cultural and humanitarian operators; sensitize policy-actors; train cultural, humanitarian and development workers; develop its multi-stakeholder platform, including UNESCO Chairs and international experts, art activists and development operators; and enroll over 100,000 people living in places of hardship in artistic initiatives.