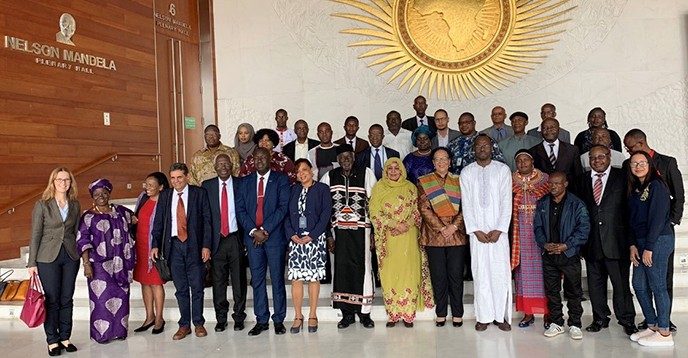 In 2016, the United Nations General Assembly adopted a resolution proclaiming 2019 as the International Year of Indigenous Languages, based on a recommendation by the Permanent Forum on Indigenous Issues, requesting UNESCO to act as lead organization, in order to draw attention to the critical loss of indigenous languages and the urgent need to preserve, revitalize and promote them by taking urgent actions at the national and international levels.

The African Meeting contributed to the implementation of the Action Plan for the organization of the 2019 International Year of Indigenous Languages, in particular through the identification of concrete recommendations to be integrated in the Global Strategic Outcome Document. UNESCO is engaged in regional consultations for the preparation of the document, which will build the path for the achievement of strategic objectives and expected impacts in the area of indigenous languages worldwide, by identifying existing challenges, good practices, concrete policy-directions and future actions.

H.E. Amira El Fadil, Commissioner for Social Affairs of the African Union Commission, opened the regional meeting by stating that we should ensure a fair use of African indigenous languages in all socio-cultural, political and economic domains.

Ms Ana Elisa Santana Afonso, Director and Representative of UNESCO Addis Ababa Liaison Office, highlighted the successes reached by UNESCO in cooperation with different partners towards the implementation of the international year, while calling for further engagement at all levels. “As we have now entered the second half of this international year, it is key to pave the way for the implementation of long-term international, regional and national commitments related to language development”, she said.

Ms Dorothy Gordon, Chair of UNESCO Information for All Programme (IFAP), which supported the regional meeting, stressed the urgency to work “towards providing an inclusive language environment that allows people to enjoy their full range of human rights. To do so, it is essential to use and apply digital solutions for language protection, documentation, support and promotion, especially to encourage the intergenerational transmission of languages in view of the growing youthful population in Africa”.

Mr Yahya Al-Matarr Jobe, Deputy Permanent Delegate and Counseller, Delegation of Gambia to UNESCO, and representative of the Electoral Group of African Member States to the Steering Committee, informed that Gambia, together with other members of the committee will make all the efforts to support the possible endorsement of the Outcome Document at UNESCO’s Executive board, so as to bring further attention and mobilize stakeholders for the promotion and support of indigenous languages worldwide.

The participants assessed the status of indigenous languages in the region and engaged in a constructive dialogue to identify the ways to maintain as well as revitalize the rich linguistic diversity found in the African region. As expressed by Dr Lang Fafa Dampha, Executive Secretary of ACALAN, it is critical to make all efforts to harness the potential of indigenous languages for social, cultural, economic, environmental, technological and scientific change: “Our languages are at the core of our development”.

Mr Mohammed Handaine, President, The Indigenous Peoples of African Co-ordinating Committee (IPACC), mentioned that the mission of the committee of coordination of indigenous peoples in Africa is within the frame of promoting, human rights, gender equality, and linguistic diversity.

One of the key objectives of the meeting is promoting the human rights and fundamental freedoms of indigenous peoples, with special focus on support, access and promotion of the African indigenous languages and better integration into the policy and strategic frameworks, research agendas and development of concrete tools and services.

The meeting concluded with an articulation of recommendations for the preparation of the Strategic Outcome document and African regional meeting document which summarize the key issues related to African languages within the context of the 2019 International Year of Indigenous Languages.