Access to information gets an upgrade in SDG indicators framework 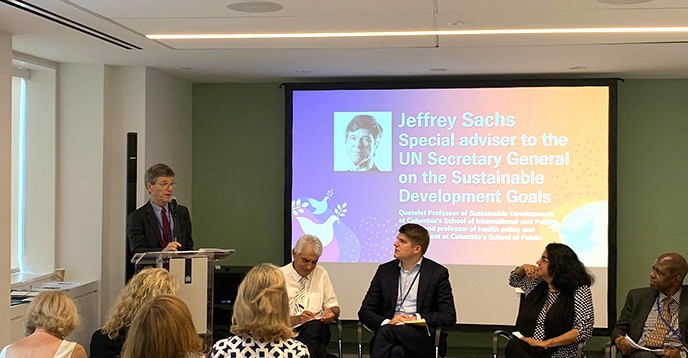 Launch event of UNESCO’s report on the monitoring and reporting on SDG 16.10.2 at UN High-Level Political Forum (HLPF) in New York on 17 July 2019.
© UNESCO

The UN has upgraded the status of an indicator to measure access to information within the Sustainable Development Goals (SDGs), following progress in expanding the monitoring of the issue by UNESCO during 2019.

This was agreed by the Inter-agency and Expert Group on Sustainable Development Goal Indicators (IAEG-SDGs) during its tenth meeting on 21 - 24 October 2019 in Addis Ababa, Ethiopia.

“The reclassification of this indicator represents a big step forward, as countries now have a solid reason to include Indicator 16.10.2 in their SDG implementation strategies,” said Guy Berger, UNESCO Director for Freedom of Expression and Media Development. “We encourage our Member States to reflect the importance according to this indicator by including it in their national and global monitoring and reporting on SDG progress,” he added.

Access to information is not only a basic human right, but also an important tool for promoting the rule of law and ensuring other rights as well as goals under the SDGs.  It is therefore an enabler for sustainable development in areas such as health, environment, addressing poverty and fighting corruption.

As part of its role in the protection of the right to seek and receive information, UNESCO has been designated by the UN General Assembly as the custodian agency for global monitoring of Indicator 16.10.2.

In past years, UNESCO relied on desk-research to assess the number and quality of laws, but in 2019 it piloted on-the-ground surveys of actual implementation of the laws in 43 countries. In 2020, working with the UNESCO Institute of Statistics, the survey on implementation will be sent to all 193 members of the UN.

“All this means that the world is increasingly able to assess the status of, and progress towards, the adoption and implementation constitutional, statutory and/or policy guarantees for public access to information,” pointed out Berger.

The IAEG-SDGs developed a system of tiers, or levels, to classify each SDG indicator based on its methodological development and the availability of data at the global level. The tier-system helps monitor the quality and availability of data, allowing for better understanding and addressing the gaps in achieving the SDGs.

Tier 1 indicators, which now include 16.10.2, are those with an internationally established methodology and standards, and where data are regularly produced by countries for at least 50 per cent of countries and of the population in every region where the indicator is relevant.

Indicators in Tier 2 are those with an internationally established methodology and standards are available, but data are not regularly produced.

During the UN High Level Political Forum (HLPF) on SDGs in New York in July 2019, UNESCO launched its report of the 2019  surveys. During the occasion, increased monitoring in access to information was reflected within reports by 28 countries - more than half of the total of 47 who took part in the Voluntary National Review (VNR) process for the year.

Recognizing the importance of right to information, including as an enabler of all goals within the 2030 Agenda, the 74th UN General Assembly (UNGA) on 15 October 2019 proclaimed 28 September as the International Day for Universal Access to Information (IDUAI).

“Each year there is growing commemoration of IDUAI and we encourage the everyone to use the date each year to publicise their 16.10.2 monitoring results reinforce the work they are doing, raise public awareness, and plan for further improvement,” said Berger.

As many as 126 UN Member States have adopted access to information guarantees, according to UNESCO data in May 2019.

Access to Information, Communication and Information, Fostering Freedom of Expression, Media Development and the IPDC