50 years of science for the future 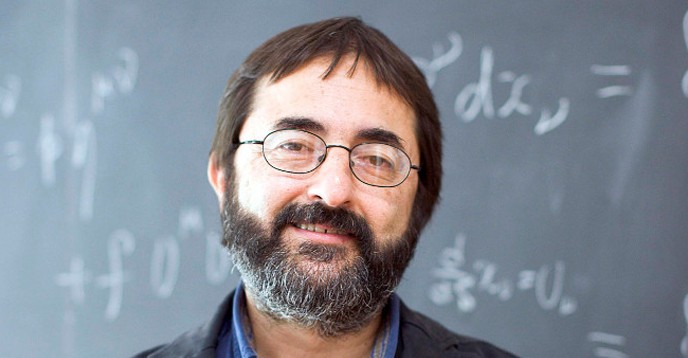 For the past 50 years, the Abdus Salam International Centre for Theoretical Physics (ICTP) has been ensuring that scientists from the developing world have access to the same resources and opportunities enjoyed by their counterparts in wealthier parts of the world. As ICTP celebrates its milestone anniversary with a four-day event, drawing everyone from Nobel laureates to the most promising young scientific minds in the developing world, Director Fernando Quevedo sees strong evidence of a successful formula in the centre’s past. For the future, he envisions a network of developing-world scientists that is broader and better-connected than ever.


The Abdus Salam International Centre for Theoretical Physics is already a core institution for physics and mathematics in the developing world. Now, as it gets ready to begin its second half-century, the centre is expanding into areas that seem to extend well beyond theoretical: how physics intertwines with the life sciences, for example, and more applied research in areas such as telecommunications and renewable energy. Add in a new network of satellite centres throughout the developing world, and it’s clear that ICTP is looking to extend its networks – and strengthen its influence – in whole new ways, says Director Fernando Quevedo.

What are ICTP’s greatest achievements over the past 50 years?
We always say that ICTP is an institution run by scientists for scientists. The achievements are how much we have helped scientists to keep on with their careers, their research, and advocate for future generations. The fact that we have a big network of scientists who have trained here, and who have sent us their students who are doing activities with us through several generations, is exactly what we think the mission of ICTP has been.

The only way to promote science as a long-term project is to measure in human resources. The fact that there are people doing science, in particular physics and mathematics, in developing countries over these 50 years, that has been an achievement of ICTP. Otherwise these people would have left the field or the country. So in that sense we have been working against brain drain and have managed to keep this community of scientists active. That is overall our main achievement.

Could you tell me a few examples of people who came to ICTP and went on to help control the brain drain problem?
Brain drain is a very delicate issue. We want to have high level science in developing countries, for this they [the countries] need to support the scientists. But sometimes policy makers tend to treat the scientists as objects. They may not realize that the most important component in the scientific activities are the scientists themselves and that we became scientists because we fell in love with the field itself and decided to dedicate our whole lives to that. ICTP supports scientists and helps to fight the brain drain but it is up to their countries to recognise their value and offer them good conditions to go back.

There are some success cases we had who didn’t go back to their countries. (…) It can be said too many have left developing countries in the past, and gone to the United States or Europe, but then they can go back [to their home countries] do research and teach. So this diaspora is not a complete loss for the country. In my experience, I’m a case of brain drain, because I left my country and didn’t go back. But the reason I’m here at ICTP is I’m trying to support developing countries, because I know there are many people like me who want to become scientists but are not given those opportunities.

There are other examples of successful ICTP alumni who went back to their countries. One student, Shaaban Khalil, from Egypt, was trained here; ICTP helped him get a PhD position in a European country, he came back to ICTP as a postdoc. Then, following the advice of ICTP staff members, he decided to go back to Egypt. So he went back, we supported him there, he sent us his own students and helped organize activities with us. He became the founder of what we call the affiliated centre for ICTP (we have seven or so affiliated centres in the world), the Centre for Theoretical Physics first at the British University in Egypt and now moved to be the first (of more than 10) centers of the newly created Zewail City of Science (the most ambitious scientific initiative in Egypt) and has joined the CMS experiment at CERN, one of the two experiments that discovered the Higgs particle two years ago.

So, in just one single person, you can see how ICTP has helped different people in their career, all the way to going back to their original country. (…)

Where do you see ICTP 50 years from now? Feel free to indulge your imagination.
(Laughs) Yes, that’s good. Well, you have to expand or otherwise you become extinct. Expansion means several things.
There’s expansion in-house. We are a very small institution, and what we have proven in these 50 years is that ICTP is a good model. (…) if you want to say anything negative about ICTP, it’s that it’s too small. The model is very good. But being small, we can detect the need, but we don’t have the resources to do everything.

So expansion, in-house, makes a lot of sense – but not only more of the same. Because also, science has developed in the last few years. It’s good to have the basic sciences that we’ve supported all this time: high energy physics and cosmology and condensed matter and pure mathematics. But the vision of Salam was also for more applied subjects – climate change, telecommunications and so on. There are also fields emerging as basic fields. For me, I just think it’s fascinating, for example, the relationship between physics and biology or mathematics and biology – we call it quantitative biology – is something that is very fast-growing and promising to be a major player in this century, at least.

For expansion outside Trieste, we are starting new partner institutions so that they can play the same role that ICTP plays in their own region. The first successful case is ICTP-SAIFR (South American Institute for Fundamental Research) in São Paulo, Brazil. (…) One in Chiapas, Mexico, is building up; that’s to cover the region between Central America and the Caribbean. Then we are also starting one in Izmir, Turkey, to cover the region nearby. One in China, in Beijing, with the University of the Chinese Academy of Sciences. We’re also planning to have one with the University of Rwanda to cover (…) at least East Africa. And probably more – we have possibilities in other countries.

So my vision for 50 years from now is to have a real network of ICTP-like institutions based in key countries to address the problems of those regions, because the situation near, say, Brazil is very different from the countries near Mexico. (…)

How has information technology lessened the isolation of scientists and enhanced their ability to communicate with each other and preserve networks?
We had a problem once in the 1990s with a Nigerian community that wanted to come to one of our activities, and for some reason related to communication, it didn’t work. So then our scientists addressed the problem, went to Nigeria, and helped to install Internet in different universities. Talking to Nigerian scientists, it’s very inspiring, because they owe to ICTP that they have Internet access.

Recently, China donated a huge cluster of computers to Sudan*. (…) But nobody in Sudan was trained to manage it and run it and so on, except for a Sudanese scientist who trained in one of our programs. So he took his education to this cluster of computers. We didn’t have the funds to donate a big cluster, China had it, but we had the human resources, the know-how.

We also have a group called “ICT for Development” dealing with that issue. What they like to say is they train the trainers, using simple kits you can build yourself to allow people to have access to wireless communications. Some regions have access to Internet, but only in the main cities. Once you go 100 miles from that, people often have no access. So they allow these people to have access through their kits and training in the schools and hospitals.

Now is probably the first time that this technology of communication is equally available worldwide. More than 70% of mobile phones are in developing countries, so we’re trying to have more of our materials available on mobile phones, because we know this is only going to get better. People will only have easier access, more smart phones, and so on.

We have to take advantage of that now. What used to be a big problem, isolation, is getting more or less solved by more access to communication. (…)

How are you celebrating your anniversary?
We have a conference to celebrate the anniversary 6-9 October 2014. We’re trying to bring top scientists and policy makers worldwide with activities at both levels. In particular, we have the Dirac Medal, one of the most prestigious prizes for theoretical physics, that we give every year. We plan to have many Dirac Medalists. Some of them got the Nobel Prize afterward so we’ll have several Nobel Prize winners.

Also, we plan to have ministers of science and directors of UNESCO, IAEA, CERN, secretary general of ITU, etc. It would be a good opportunity to remember the previous 50 years and to have a vision for the next, say, 50 years. In my case, I have to be more concrete and ask what we will accomplish in the five years, which corresponds with my period of leadership. (Laughs)

We’ll also take the opportunity not only to celebrate ICTP but to discuss the role of ICTP and other international institutions for the promotion of science worldwide, and how we can work together.

About ICTP
ICTP, founded by Nobel Laureate Abdus Salam in 1964, is an international research institute for physical and mathematical sciences based in Trieste, Italy, that aims to promote scientific excellence in the developing world. ICTP seeks to accomplish its mandate by providing scientists from developing countries with the continuing education and skills that they need to enjoy long and productive careers. The Centre operates under a tripartite agreement with the Government of Italy, UNESCO and the IAEA.

About the World Academy of Sciences (TWAS)
TWAS is a global science academy that works to advance science and engineering for sustainable prosperity in the developing world. Founded in 1983 by a distinguished group of scientists from the developing world, under the leadership of Abdus Salam, it is located in Trieste, Italy. TWAS is a 'programme unit' within UNESCO.