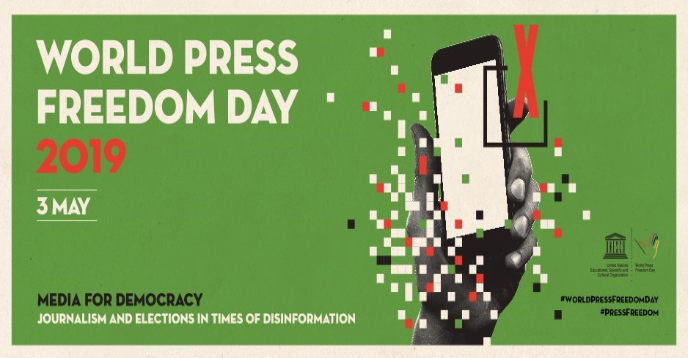 The relationship between the press and democracy will be the main theme of this year’s edition of World Press Freedom Day (3 May) jointly organized by UNESCO, the Ethiopian government and the African Union Commission in Addis Ababa (Ethiopia), from 1 to 3 May. More than one hundred events will also take place around the world in observance of the day.

How can journalism rise above emotional content and fake news during an election? What should be done to counter speeches demeaning journalists? To what extent should electoral regulations be applied to the internet? This year’s World Press Freedom Day, whose theme is “Media for Democracy, Journalism and Elections in Times of Disinformation”, will be the occasion to reflect on these current issues.

An academic conference to take place on 1 May, will present new research on journalists’ security. It will aim is to promote dialogue between researchers and political actors working on common subjects. The conference will especially focus on the security of women journalists as well as those who are covering elections. The programme also includes a "Laboratory" dedicated to a discussion on online harassment of women journalists, and different thematic sessions, especially on media and elections in Africa, and media reform in Ethiopia.

On 2 May, the Director-General of UNESCO, Audrey Azoulay, will launch the major event to mark the celebration alongside Ethiopian President, Sahle-Work Zewde, Executive Secretary of the United Nations Economic Commission for Africa, Vera Songwe, and African Union Commission Deputy Chairperson, Amb. Kwesi Quartey.

In total, more than one thousand participants are expected, including representatives from civil society, media, professional associations, universities and the justice sector. Parallel and plenary sessions on strengthening the role of media faced with new challenges, and understanding the links between media, democracy and elections will be held alongside the conference.

Among the highlights will be the UNESCO/Guillermo Cano World Press Freedom Prize award ceremony on the evening of 2 May. The prize will be awarded, on the recommendation of an independent international jury, to imprisoned Myanmar journalists Kyaw Soe Oo and Wa Lone by Audrey Azoulay, in the presence of Ethiopian Prime Minister, Abiy Ahmed, and African Union Commission Deputy Chairperson, Amb. Kwesi Quartey.

Throughout the conference, a newsroom will be available for young professionals and journalism students to report on the daily activities and to provide opportunities for the next generation of reporters to meet their colleagues from around the world.

This year, UNESCO also launched the Defend Journalism Campaign that encourages media to show their solidarity for a free and independent press through the use of banners on their printed publications and digital platforms.

World Press Freedom Day was proclaimed by the UN General Assembly in 1993, following the recommendation of the 26th session of UNESCO's General Conference in 1991. It celebrates the fundamental principles of press freedom, assesses the state of press freedom throughout the world, defends the media from attacks on their independence, and pays tribute to journalists who have lost their lives in the line of duty.

Download the application for the conference on Google and Apple Stores

Fostering Freedom of Expression, Safety of Journalists, Press Freedom on All Platforms
Ethiopia