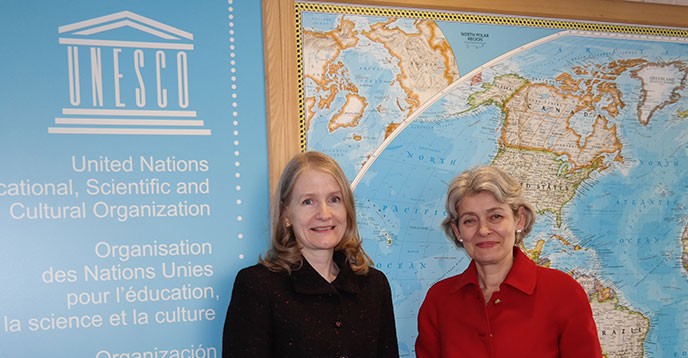 On 13 February 2014, the Director-General, Irina Bokova, has met with Ms. Nerissa Cook, Deputy Assistant Secretary of State for International Organization Affairs, in order to discuss various aspects of bilateral cooperation between UNESCO and the United States of America. Ms. Beth Poisson, Chargé d’affaires a.i. of the US Permanent Delegation to UNESCO was also present at the meeting.

Ms. Bokova stressed the importance of USA’s full engagement in the Organization for the universality of UNESCO’s action and suggested to deepen partnerships through innovative private sector initiatives. She outlined specific areas where both sides could work together to tackle pressing global challenges and to advance education, science and culture worldwide.

“I welcome the fact that the USA has become a champion country for the United Nations Secretary-General’s Global Education First Initiative”, said the Director-General. “I hope that this designation will strengthen USA’s commitment to advocate for strategic investments in support of education, especially girls’ education, in countries where it is much needed”.

The Director-General referred to the Global Partnership for Girls’ and Women’s Education Initiative, that was launched at UNESCO in May 2011, in the presence of Ms. Hillary Clinton, former US Secretary of State, and she encouraged the United States to support UNESCO’s leading work to empower girls and women in developing societies.

Speaking about UNESCO’s lead role in the Scientific Advisory Board to the UN Secretary-General, the Director-General highlighted the urgent need to consolidate linkages between science and policy in order to better address the challenges of sustainable development, including climate change and the ocean, and she stressed UNESCO’s forthcoming participation in the San Francisco International conference on Oceans at the end of February.

“The United States has enormous scientific and technological potential and its active support to our efforts in this challenging area would be appreciated” said the Director-General.

In the area of culture, Irina Bokova underscored UNESCO’s leading role in the protection of the cultural heritage in conflict areas, such as Mali, Iraq and Libya, and called upon the USA to join forces with UNESCO in raising public awareness on UNESCO’s action for the preservation of cultural heritage as fundamental for reconciliation, self-confidence, and lasting peace.

“Culture is a powerful tool to combat ignorance, intolerance and fundamentalism and its role in development is undeniable” said the Director-General.

Ms. Nerissa Cook underscored the relevance of UNESCO in addressing global challenges in its fields of competence. She reiterated USA’s commitment to pursue its engagement with the Organization and said that the US Administration was continuing to work a solution to the funding issue. She agreed with the Director-General that bilateral cooperation could be further strengthened in the areas of education, poverty eradication, social cohesion, the environment, oceans, cultural heritage and youth empowerment. She also spoke about the growing significance of public-private partnerships to achieve sustainable development objectives and to engage the American private sector in the activities of UNESCO.