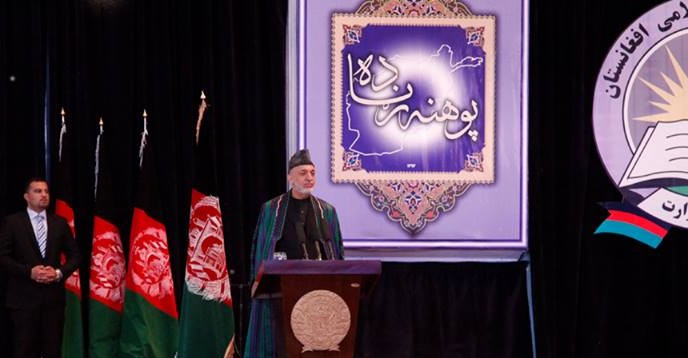 Kabul, 22nd March 2014. The official opening of the new school year took place today at Amani High School in Kabul. President Hamid Karzai called for an increased focus on education and made an appeal for “education, education, education” urging children and youth in Afghanistan to seek learning to improve their future and that of their country. The Minister of Education, Mr. Farooq Wardak, highlighted the need to further invest in the education system and reiterated UNESCO’s global appeal for member states to contribute at least 20% of their national budget to education.


Three decades of conflict in Afghanistan have hindered the development of a strong and equitable education system, contributing to high levels of illiteracy and limited access to education. However, the last twelve years have seen important achievements with primary school enrolment rising from less than one million in 2001 to a MoE current estimate of 10 million students in 2013, including more than 3 million girls. The majority of children who enrol reach Grade 5 (84% according to (MICS 2012) and there is a 93% transition rate to secondary school (MICS 2012). Tertiary education enrolment has increased by 41% from 2008 to 2011 (ESIR 2012). Higher education is also taking positive steps forward having 77,336 students in 2011.

Minister Wardak thanked UNESCO for its support to education development together with the Governments of Japan and Sweden. UNESCO’s Enhancing Literacy in Afghanistan (ELA) is one of the largest programmes in the history of literacy development in Afghanistan. The Government of Japan has already provided $34 million in the past five years and will invest $20 million for 2014-16, while the Government of Sweden has joined the programme with $9.3 million for 2014-16. This will allow the literacy programme to reach 1.2 million people and expand from 18 to 27 provinces.

It is estimated that among young Afghans (15-24 years) 39% are literate (male 53%, female 29%). In the adult population the average literacy rate is only 33 % (male 39 %, female 12 %).  UNESCO also developed the first ‘National Literacy Strategy 2014-2020’ with the MoE, providing much needed strategic direction for stakeholders to share complementary goals and maximize collaboration. As the elections approach, education remains one of the main challenges for national development.