The Ndembu archives in llCT/ ABU include around 1160 manuscript itens on paper and some in other supports, from the end of the 17th century till the beginning ofthe 201 h century. They were created and kept by African local authorities of Central Africa., in the north of Angola known as Dembos (Ndembu), of the Mbundu group, which organized state archives. They comprise the following Dembos: Caculo Cacahenda (probably the most extensive), Caculo Congola, Ndala Cabassa, Zombo Amocambo, Quibaxi Quiamubemba, Gimbo Aluquem, Ngombe Amuquiana, Mufuque Aquitupa and Pango Aluquem. Other provenances have still to be checked in detail as archival processing goes on. The documents were collected in Angola, in 1934, by Antonio Almeida (1900-1994), a medical doctor and physical anthropologist, during a study mission to the Ndembu area. This mission was an anthropological one (focusing on anthropometries) with ethnographic and linguistics aspects. It was requested by the High Colonial School (Escola Superior Colonial) of the Overseas Ministry and funded by the Junta da Educa~ao Nacional, Portuguese government offices.

They were transferred to the AHU (Overseas Historical Archive) in three groups, from 2007 to 2009. A part of them was summarised and published, first by Antonio Almeida (ca. 75) and Ana Paula Tavares and Catar.ina Madeira Santos (around 200). Another group was also transcribed (ca. 400) in order to be published by the latter.

Ca. 520 items were desinfestated by anoxia in 2007 and armmd 240 were submitted to conservation treatment (cleaning, tear mending, gaps filling and enclosure in archival sleeves) in 2009/2010. Iron gall ink affected some of the documents that are expected to be treated along 20 I 0/20 II. The ANA has a collection of documents organized in codices. For the time being, just one codex was found, comprising the register of out-letters from the colonial authorities to Ndembu chiefs. Due to its contents it is possible to understand that there was a fluent exchange of correspondence between the colonial authorities and Angolan chiefs. However, the letters of these Ndembu chiefs were not found in the colonial archives. The codex 240, Government Section, Letters to Angola, Correspondence with African Chiefs, dated from 1798-07-12 to 1854-09-18, presents a set of 184 written folios and 67 blank folios, regarding the mentioned register of out letters from the colonial authorities to Angolan chiefs - Ndcmbu chiefs, King of Kongo, Vice-Kings of Cabinda, Mbalundu chiefs and Humbe chiefs. The codex is already known by some researchers, who mentioned it in their works, such as Prof. Joseph C. Miller and Prof. John Thornton. To ensure the conservation of the codex, this was digitized. Jn the Ndembu archives, Portuguese is the language used, though integrating and adapting Kimbundo words. Kikongo echoes here and there and some Latin expressions appear too.

These documents estabHsh and reflect diverse relations between, on the one hand, Portuguese colonial authorities of Angola including the governor in Luanda and, on the other, African authorities. The same happens among these ones and between them and the King of Kongo. Subjects are, for instance: space mobility, commercial routes, land ownership, state and diplomatic relations, vassalage, war, jurisdictional conflicts and European and African regulation, slave trade and European and African domestic slaves, counting and teaching Portuguese language, scribes and secretaries for the Dembos, African lineages. The archives are composed by original or copies and drafts of official and some private letters. wills, lists of products, receipts, bills of exchange, certificates, vassalage acts, orders, prayers, ex-votos, judicial cases, spelling books. Several documents were certified with wax seals and seals on paper either by Ndembu or Portuguese authorities.

There are allied archival materials not only in the HCT, mainly in AHU, and in the ANA, but also in the Military Historical Archive (AHM. Lisbon). In the Lisbon Geographical Society (SGL) there are other allied materials, such as Ndembu swords and staffs and also photos of these African authorities. ANA and IICT/AHU envisage organizing a training course in palaeographics, archival processing and conservation on the Ndembu Archives. ANA is working on listing and preserving the Angola Ndembu archives. 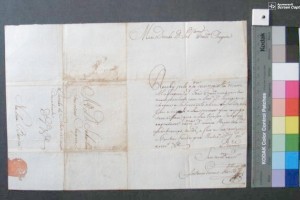 Name and identification details of the items being nominated

Consisting of some 1,160 manuscript items on a variety of supports from the late 17th century to the early 20th century, the Ndembu archives are uniquely valuable to scholarship in history, anthropology and linguistics. They bear testimony to the transformation of an essentially oral southern African culture, through the assimilation of the Portuguese language and its repercussion on both Portugal and Brazil.