Antonio Carlos Gomes: composer of two worlds gathers together documents produced by the composer, which have never been presented complete, shading light on his life and work.

Carlos Gomes created works, mainly in the operatic field, starting with the world première of his third opera – Il Guarany – at the Teatro alla Scala – in Milan on March 18, 1870. From then onwards, he searched for originality in music which, until then, was still dependent and influenced by Italian opera.

This documentation is a source for study of music of the second half of the XIX Century. 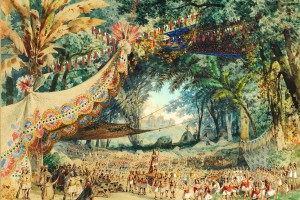 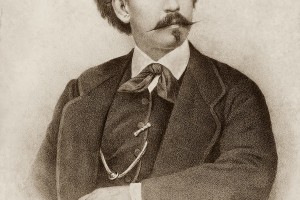 Name and identification details of the items being nominated

The musical manuscripts (autographed hand  written) and other documents that belonged to Antonio Carlos Gomes were donated to institutions by descendants of the composer, the greatest part by his daughter Ítala Gomes de Carvalho. Part of this donation, made up of letters and scores, was transferred to the Fundação Biblioteca Nacional.

Other musical manuscripts were donated to the Brazilian government by Casa Ricordi & Cia, Milan, Italy.

The origin of the hand-writen manuscripts by Antonio Carlos Gomes in the Escola de Música da Universidade Federal do Rio de Janeiro can be identified by the rubber stamps used: Teatro São João, Instituto  Nacional  de  Música and Instituto Carlos Gomes. Some were donated by Leopoldo Miguez, then director of the Instituto Nacional de Música.

The origin of the correspondence exchanged between the composers Antonio Carlos Gomes and Francisco Braga, in the Arquivo Nacional, cannot be traced. The letter addressed to Barone di Loreto is included in the collection that was purchased by the Arquivo Nacional in 1950.

The documentation in the Teatro alla Scala, was given by the composer himself to that institution. Some records were also donated by Casa Ricordi & Cia, Milan, Italy.