Man and the Biosphere (MAB) Programme

The prizes managed by UNESCO's Man and the Biosphere (MAB) programme afford recognition to outstanding contributions in the management or preservation of the environment. They honour successful management of biosphere reserves in line with recommendations of the Seville Strategy, and foster access for young scientists, especially women, to advanced research facilities through respective prizes and awards schemes. The following  UNESCO Prizes are managed by the MAB Secretariat: 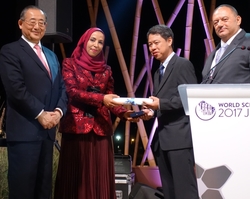 The purpose of the UNESCO Sultan Qaboos Prize for Environmental Conservation is to afford recognition to outstanding contributions by individuals, groups of individuals, institutes or organizations who have contributed to environmental and natural resources research, environmental education and training, creation of environmental awareness through the preparation of environmental information materials and activities aimed at establishing and managing protected areas including in relation to sustainable tourism, such as Biosphere Reserves, natural World Heritage sites and UNESCO Global Geoparks. The objective of the Prize is in conformity with UNESCO’s policies and is related to the Programme of the Organization in the field of environment, natural resources and education for sustainable development.

Applications for the 2021 edition of the UNESCO Sultan Qaboos Prize for Environmental Conservation are now closed.

Nominations for the Prize can only be made by UNESCO Members States with consultation of their National Commissions, and by Non-Governmental Organizations maintaining official partnerships with UNESCO, and active in relevant fields covered by the Prize.

Other interested NGOs, research institutions, universities and individuals, are not eligible to make nominations directly to UNESCO. Therefore, such bodies and individuals are invited to propose their candidate to their country National Commission for UNESCO, which may or may not select it as its formal candidature.

Candidatures should be prepared in English or French. Self-nominations cannot be considered.

Since 1989 MAB has been supporting young researchers each year with awards of up to US$ 5,000 in support of their research on ecosystems, natural resources and biodiversity. Through the MAB Young Scientists Awards, MAB is investing in a new generation of scientists worldwide because well-trained and committed young people are key to addressing ecological and sustainability issues. The International Coordinating Council of the Man and the Biosphere Programme (MAB-ICC) adopted new criteria and conditions for the selection of MAB Young Scientists Award winners) at its 29th session on 12-15 June 2017, in order to address the Lima Action Plan (LAP) for Biosphere Reserves and relevant Sustainable Development Goals (SDGs) in applications.

The MAB-ICC endorsed seven winners for the MAB Awards for young scientists during its 31st session on 17 - 21 June 2019.

Note that applications must be received by UNESCO no later than the deadline to be eligible.

The MAB Young Scientists Awards targets young researchers carrying out interdisciplinary research in line with UNESCO's Man and the Biosphere (MAB) Programme. Priority is given to projects carried out in biosphere reserves. Until 2025, implementation of the UNESCO MAB Programme is guided by the MAB Strategy and Lima Action Plan for UNESCO’s MAB Programme and its World Network of Biosphere Reserves (LAP), which contributes to the achievement of the 2030 Agenda and its Sustainable Development Goals (SDGs). MAB Young Scientists Award applicants are strongly encouraged to take into account the priorities of the LAP, and to identify in their applications how their research contributes to the research-related actions of the LAP and to the SDGs.

The objectives of the MAB Young Scientists Award Scheme are to:

The following criteria are used in the selection of MAB Young Scientists Awards:

* For the countries in which a MAB National Committee does not exist or is not fully operational, the National Commission for UNESCO will ensure the selection of candidates according to the above criteria. 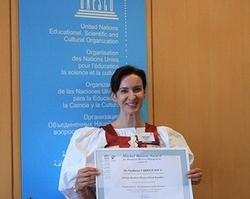 This US$12,000 award is given every two years during the MAB Council, in memory of Dr Michel Batisse, for outstanding achievements in the management of the biosphere reserves in line with the recommendations of the Seville Strategy.

The 2019 Michel Batisse Award was given to José Santiso (Spain), head of the Mariñas Coruñesas e Terras do Mandeo UNESCO Biosphere Reserve for his project promoting local, organically grown food produce. This project has helped preserve local varieties and linked producers and consumers, including school canteens.

Applications must be received by UNESCO no later than 31 January 2021 to be eligible. Only applications in English and French are accepted. Applications that are not endorsed by a MAB National Committee or a National Commission for UNESCO are not eligible for consideration.

The Michel Batisse Award ONLY acknowledges COMPLETED work ACCOMPLISHED within a Biosphere Reserve in the World Network.  Case studies that concern future work will not be considered.

The 2019 Michel Batisse Award was given to José Santiso (Spain), head of the Mariñas Coruñesas e Terras do Mandeo UNESCO Biosphere Reserve for his project promoting local, organically grown food produce. This project has helped preserve local varieties and linked producers and consumers, including school canteens.

The 2017 Michel Batisse Award was given to Vladimira Fabriciusova (Slovakia), coordinator of the Polana Biosphere Reserve for her case study “Biosphere Reserve: an opportunity for humans and nature.”

The 2016 Michel Batisse Award for a case study concerning the management of a biosphere reserve goes to Qu Shuguang (China), Director of the Wudalianchi Biosphere Reserve, for his study on the Wudalianchi ecomigration project to protect the environment and improve the population’s means of subsistence.

The 2015 Michel Batisse Award for a case study concerning the management of a biosphere reserve was attributed to Bandi Namkhai, Director of the Khustain Nuruu Biosphere Reserve in Mongolia, for his study of Khustain Nuruu.

The 2014 Michel Batisse Award was attributed to Ana Luisa R. Figueroa (Mexico), for her case study on "A group of fishermen and fishing families who became guardians of the San Pedro Martir Island, part of the Islas del Golfo de California Biosphere Reserve".

The Batisse Award was granted to Elizabeth Ines Taylor Jay (Colombia) for her case study on “Improving sustainable development and coral reef conservation through community-based watershed management in the Seaflower Biosphere Reserve.”

The Michel Batisse award goes to Fabio Kalesnik (Argentina) for “Training on environmental education, conservation and sustainable development and its innovatory initiatives with islanders in the Delta del Paraná Biosphere reserve.”