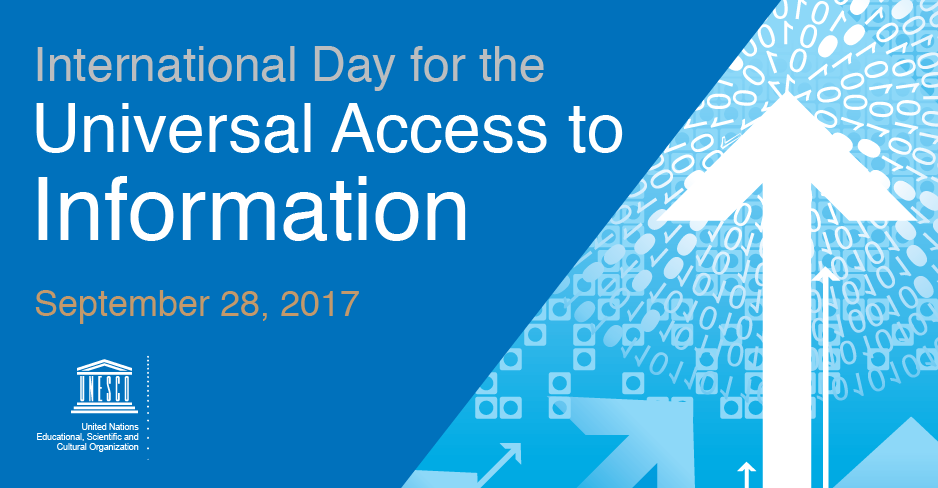 IDUAI has particular relevance with the new 2030 Development Agenda, and in particular with Sustainable Development Goal (SDG) target 16.10 (link is external) which calls for ensuring public access to information and protection of fundamental freedoms.

Universal access is also central to the UN’s World Summit on the Information Society (WSIS), which recognized the ambition of developing inclusive Knowledge Societies. “Accessibility” is also recognized as one of the four principles in UNESCO’s ROAM model of Internet Universality.

The theme of access was at the heart of the 2016 World Press Freedom Day celebrations in Helsinki.  UNESCO’s global event produced The Finlandia Declaration, inter alia marking the anniversary of the world’s first freedom of information law, which was adopted 250 years ago in today’s Sweden and Finland. Since then the adoption of freedom of information laws became a global trend, involving more than 100 countries.

The International Programme for the Development of Communication promotes many projects relevant to freedom of information, and acts as convening actor for the related indicator under Sustainable Development Goal 16.10.2.

UNESCO’s Memory of the World Programme as well as UNESCO’s Recommendation concerning the Promotion and Use of Multilingualism and Universal Access to Cyberspace (2003) ensures that the world's invaluable documentary heritage belongs to all and that multilingualism and universal access remains in the center of the agenda of internet development.

In this context, UNESCO also does important work to promote the United Nations Convention on the Rights of Persons with Disabilities (link is external) ensuring that information can help to fully integrate women and men with disabilities into every aspect of social, political and economic life.

The IDUAI is an outcome of advocacy of the African Platform on Access to Information (APAI) and building on work of FOIAnet. (link is external) Efforts to produce more open governance have also emerged, such as the multilateral Open Government Partnership, (link is external) with 69 participating countries.

UNESCO hopes that the marking of 28 September as the “International Day for Universal Access to Information” will provide for more countries adopting FOI legislation, developing policies for multilingualism and cultural diversity in the cyberspace, and ensuring that women and men with disabilities are integrated.

These steps will further strengthen progress towards the 2030 Development agenda and pave the way for the creation of knowledge societies worldwide.