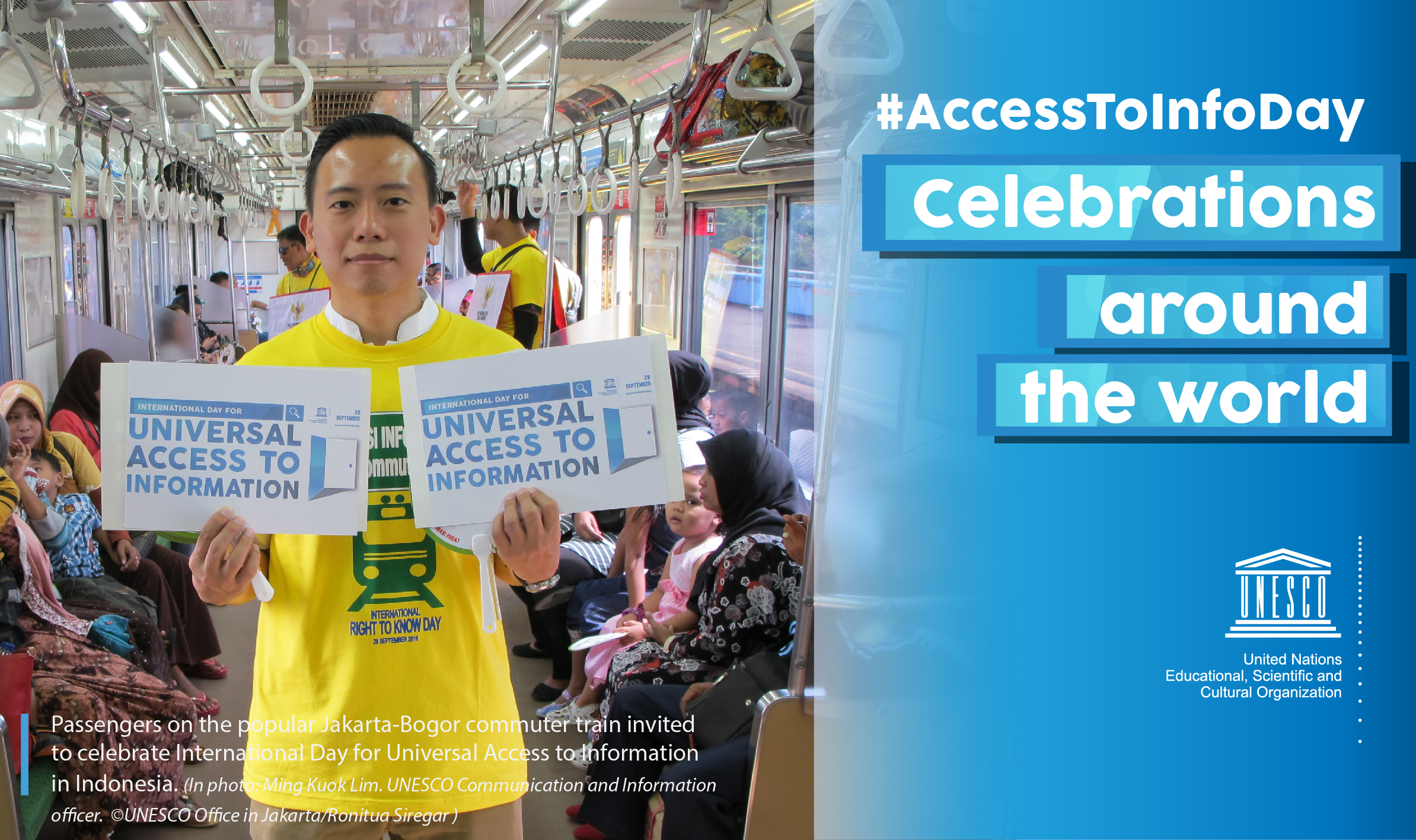 Brief description:
UNESCO Dhaka Office is organizing a national seminar on 25 September 2016. A key note paper titled: “Knowledge of Access to Information as RIGHTS” will be presented, followed by a panel discussion and a question and answer session. Professor Dr. M. Golam Rahman, Chief Information Commissioner, Information Commission, Bangladesh will be the Chief Guest and Ms. Beatrice Kaldun, HOO, Dhaka Office will deliver the inaugural speech at the Seminar. Approximately 80-100 participants among them journalists, UN agencies, NGO partners, Media and Civil Society organizations are expected to attend.
Partners:

Brief description:
The discussion panel will explore the policy and technological framework enabling access to information for development in present Cuba. Speakers will discuss access to information in the 2030 Agenda as well as in the new social and economic policy being designed in the country. Ongoing initiatives to foster more transparent public institutions, access to documentary heritage and citizen’s participation in the public life through data meaning, data linking, mobile applications and social media will be highlighted.
Partners:

- School of Communication, University of Havana.

Brief description:
UNESCO and the Global Forum for Media Development will hold a technical workshop with 30 representatives from more than 15 organisations from different regions to discuss indicator 10.2 of the Sustainable Development Goal Target 16. The event is part of the World Forum “Decoding the Future: Rethinking Media for a New World” taking place in Jakarta from 20-22 September. UNESCO has been tasked as the Custodian Agency for this indicator and is responsible for the global reporting of the target to the United Nations. The Indicator 16.10.2 aims to ensuring public access to information and protecting fundamental freedoms, in accordance with national legislation and international agreements.
Partners:

Commemoration of the International Day for Universal Access to Information (Rountable)

Brief description:
The Islamic Republic of Iran marked the occasion on the 2nd of October by organizing a roundtable at the Bureau of Media Studies and Planning in Tehran. The event gathered university professors and students in Communication and Information Technologies, experts in modern ICTs and media professionals.
Partners:

Date and Time:
2 October 2016
Venue:
Bureau of Media Studies and Planning in Tehran

Investigative Journalism and Access to Information in Jamaica workshop

Brief description:
This workshop will train 30 journalists practising in Jamaica on Investigative journalism and access to information. Pulitzer prize winning Journalist Kimberly Kindy of the Washington Post will be the main speaker who will focus on the investigative interview and the reporting process. There will also be an overview of the Jamaica Access to Information Act. This session will focus on rights under the ACT, what information can be typically disclosed, what will likely be withheld under the ACT; and how to appeal decisions. The workshop will also cover social media and the news; sources, tracking events and pinpointing stories
Partners:

- Global Reporters for the Caribbean (GRC) in collaboration with National Integrity Action, the Jamaica National Commission for UNESCO

Access to Information: The Right of Everyone in Jordan (short film)

Photo-contest “Into the Lens - Freedom of Information”

Brief description:
A Photo-contest and exhibition “Into the Lens - Freedom of Information” will be organized on the occasion of the “International Day for Universal Access to Information” on 28 September 2016 in Almaty, Kazakhstan. During ten days, the photo-exhibition of the best photo-art works of media and information professionals from Central Asia act will be an awareness campaign on universal access to information. The International Foundation for Protection of Freedom of Speech "Adil soz" in cooperation with UNESCO Cluster Office are organizing the celebration of the event.
Read in French or Russian.
Partners:

Brief description:
The first celebration of the International Day for Universal Access to Information in Madagascar will be celebrated on 28 September 2016 in order to make citizens and public authorities aware of their respective duties and responsibilities in relation to access to information.  The day will also be an opportunity to recognize the important role that librarians and libraries play in development.
Partners:

Brief description:
The objectives of the National Consultation meeting on Law on Information Transparency and Right to Information are three-fold:

- To engage the key stakeholders in deliberations with policy makers at the national level to address the complex issues surrounding the implementation of Law on Information Transparency and Right to Information and to seek ways to resolve the issues;

- To facilitate exchange of experiences, lessons learned and good practices on Access to Information and freedom of information, and to seek the ways that the good practices are maintained in the newly formed public offices,

Celebration of IDUAI in Morocco

Brief description:
On the occasion of the commemoration of the IDUAI in Morocco, three main activities are planned:

- The General Assembly of the Réseau Marocain pour le Droit d’Accès à l’Information (REMDI). It is the main network of NGOs and CSOs dealing with the promotion of the Right to Access Information, which UNESCO has supported since its inception. In the past years, the REMDI has been actively involved in the drafting and public discussion around the Moroccan RTI law, which has now been approved by the first chamber of the Parliament.

- Transparency Morocco will organise in cooperation with UNESCO, in their regional centres in Fez (centre of Morocco) and Nador (North of Morocco) an awareness raising day around the international standards of UAI as well as the existing laws ruling the Right to Information in the country.

- A day-long open forum at the Institut Superior Institution for Communication and Information (ISIC), centre of excellence in training future journalists and communication professionals. The day will be split in two parts. First, there will be a round-table with both institutional participants and civil society ones. In the afternoon, the event will allow for the presentation of the awareness raising tool developed by the UNESCO office in Rabat: UNESKIT. In this educational tool, one tab is specifically devoted to the Right to access information. A short advocacy film will also be screened, this film was developed in both French and Arabic and aims to inform a broader audience about the RAI

“International Day for the Universal Access to Information” (IDUAI)

Adopting a Right to Information in Palestine: Significance, Opportunities and Challenges

Brief description:
The UNESCO Office in Ramallah is organizing an open encounter to discuss with international partners and selected national stakeholders the importance of adopting a Right to Information law in Palestine. UNESCO has provided technical assistance to the Palestinian Authority in the finalization of the draft Right to Access Information law through an in-depth review of the law. It also co-hosted in December 2015, together with the Ministry of Information of the Palestinian Authority and the Palestinian Anti-Corruption Commission, a seminar to discuss the proposed changes and secure an agreement on the final text of the draft law before its submission to the Council of Ministers.
Partner:

Brief description:
A South Asia regional event to celebrate the International Day for Universal Access to Information in 2016. The title for the event will be Universal Access to Information for Underserved Communities in South Asia as a Means to Achieve the SDGs. More than 100 experts are expected to participate, including invited participants from Bangladesh, Bhutan, Maldives, Nepal, India and Sri Lanka.
Partners:

- The event will be delivered with the generous support of Information for All Programme (UNESCO/IFAP) and UNESCO New Delhi Cluster Office.

Brief description:
Within the framework of creating conditions for sustainable development and peace through support to universal access and preservation of information, enhanced ICT skills open solutions, UNESCO office in Juba is supporting the design, creation, development, hosting and maintenance of the South Sudan Public Information (PIC) website. The support also includes cataloguing and classification of the PIC library information resources using the Library of Congress Scheme classification system. The website can be accessed at: http://www.southsudanpic.org/.
Partners:

Brief description:
As Viet Nam requires more highly-qualified human resources for national development, better quantity and quality of learning resources and considering that the development of teaching methods are major concerns in many universities, the cooperation in developing Open Educational Resources (OER) between universities is an important solution. The overall goal of the programme “Promoting Open Educational Resources in Higher Education in Viet Nam,” is to support OER development in Viet Nam through: (i) awareness raising on the benefits and challenges to development of OER in higher education, (ii) piloting of OER in some higher education institutions and (iii) advocacy for the development of policies, strategies, programmes, models, technology for OER in higher education.
Partners:
The University of Social Sciences and Humanities, the Ha Noi National University
UNESCO Bangkok
UNESCO Ha Noi
Date and Time:
8.30 am – 17.00, 28 September 2016
Venue:
TBC, Ha Noi, Viet Nam
Media contact:
Ms. Hoang Minh Nguyet, Communication and Information Program Coordinator, hm.nguyet@unesco.org, Tel: 84 4 37470275/6
Webpage of event or link to Field Office:
UNESCO Ha Noi Office

Brief description:
The event will showcase existing information access platforms in Zimbabwe, such as print, broadcast as well as online media through mobile networks and community information centres. It will also discuss current challenges in expanding access to information within the country with focus on access for population groups such as people with disabilities and remote rural populations. Government decision makers, Internet and mobile network providers, other private-sector media players, civil society organizations and the general public are expected to attend.
Partners:

UNESCO works with civil society organizations to advance freedom of information by addressing the challenges, fostering dialogue and providing technical advice in the process of drafting, approving and implementing FOI laws. For more information on our partners’ celebrations of the first International Day for Universal Access to Information, visit: