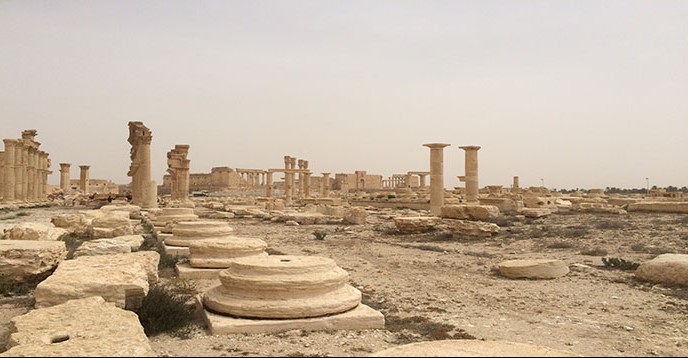 In November 2015, the 38th General Conference of UNESCO adopted a Strategy for the reinforcement of the Organization’s actions for the protection of culture and the promotion of cultural pluralism in the event of armed conflict (38/C48).

This document sets the path for the Organization’s work through two key objectives: on the one hand, strengthening Member States’ ability to prevent, mitigate, and recover the loss of cultural heritage and diversity as a result of conflict; and on the other hand, incorporating the protection of culture into humanitarian action, security strategies and peacebuilding processes.

The recent large-scale and systematic destruction and looting of cultural sites has highlighted the strong connection between the cultural, humanitarian and security dimensions of conflicts and terrorism. Attacks against cultural heritage and diversity are also attacks against people, their rights, and their security. Under the Rome Statute of the International Criminal Court, the deliberate destruction of cultural heritage may be qualified as a war crime.

This has been recognized through numerous international statements and declarations and, most significantly, in United Nations Security Council Resolution 2199 (2015) (link is external), which notably established a ban on trade of antiquities illegally removed from Iraq since 6 August 1990 and from Syria since 15 March 2011, recognizing the illicit trafficking of antiquities as a potential source of financing for terrorist organizations. On 24 March 2017, the UN Security Council adopted Resolution 2347, the first to focus exclusively on the protection of cultural heritage and significant in its recognizing that the protection of cultural property in conflict – safeguarding it against both destruction and trafficking – is inextricably linked to the attainment of peace and security, and the combatting of terrorism around the world.

In the face of these unprecedented challenges, the need for new and more effective approaches by UNESCO was recognized, which would build on the existing international legal standards - notably the 1954 Convention for the Protection of Cultural Property in the Event of Armed Conflict and the 1970 Convention on the Means of Prohibiting and Preventing the Illicit Import, Export and Transfer of Ownership of Cultural Property - and enhance the scope of their application. In this regard, the strategy adopted by the Organization’s General Conference defines priority areas of action and identifies the resources required for their implementation.

Elaboration of an Action Plan

With the adoption of the Strategy, the General Conference of UNESCO, at its 38th session (November 2015) requested the elaboration, in coordination with Member States and relevant actors, of an Action Plan in order to further refine and implement the Strategy. Furthermore, mechanisms for the rapid response and mobilization of national experts were to be defined and practical ways for the implementation of such mechanisms to be explored.

The draft Action Plan defines which specific activities – within the overall framework of the Strategy  – the Organization intends to focus on during the coming six years, identifying at the same time short-, mid- and long term priorities. These activities reflect the two main objectives and various priority areas of action identified in the Strategy.

By its Decision 199 EX/5.I(D), adopted at its 199th Session in Spring 2016, the Executive Board of UNESCO moreover requested a report on the implementation of the Strategy and the elaboration of the Action Plan to be submitted for its consideration at its 200th session, in Fall 2016.

In order to comply with these requests from the Organization’s Governing Bodies, the Secretariat initiated an online consultation with Member States from 24 June to 18 July 2016, through which they were given the opportunity to comment on a draft of the Action Plan, as well as on a proposal concerning practical ways for implementing a mechanism for the rapid intervention and mobilization of national experts. The results of this consultation have been integrated in the versions of these documents presented to the 200th Executive Board (200 EX/5 Part (I).ADD).

By its Decision 200 EX/ 5.I.F.2, adopted at its 200th session in October 2016, the Executive Board of UNESCO requested “the Director-General to undertake open and transparent consultations with Member States on the proposed Action Plan and to submit to it at its 201st session a revised version of the referred Plan, incorporating the adjustments and enrichments presented”.

Therefore, a second consultation with Member States took place from 28 October 2016 to 9 January 2017. Consequential revisions to the draft Action Plan and the proposed rapid response mechanism will be presented to the Executive Board in April 2017.

The comments provided by 21 Member States and 2 regional groups in the context of the written consultation are accessible here in their original language.

On 2 March 2017, an Information Meeting for Member States was organized, in order to further discuss the draft Action Plan and find consensus ahead of the 201st Executive Board. The introductory remarks by Ms Mechtild Rossler, Director of the Heritage Division and World Heritage Center of UNESCO’s Culture Sector, can be found here.

These additional fora allowed the Secretariat to present a consensus version of the Action Plan at the 201st session of the Executive Board (201 EX/5 Part (I) E), on the occasion of which the Member States took note of and welcomed the Action Plan.

On this occasion, the Member States also recommended that the General Conference, at its 39th session, consider including natural disasters within the scope of the Strategy for the reinforcement of UNESCO’s action for the protection of culture and the promotion of cultural pluralism in the event of armed conflict, as appropriate. Natural disasters have already been included in the scope of the Action Plan, in the context of the 201st Executive Board.