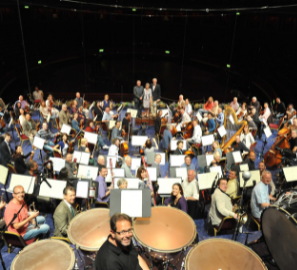 The World Orchestra for Peace was designated UNESCO Artist for Peace in August 2010, in recognition of its outstanding dedication to promoting, through music, cultural diversity, intercultural dialogue and a culture of peace.

The Orchestra was founded and first conducted by Sir Georg Solti and brought together by co-Founder Charles Kaye in 1995, to celebrate the 50th anniversary of the United Nations. In its first 25 years over 650 of the leading musicians from 125 international orchestras in 70 countries have given their services for more than 30 concerts.
The World Orchestra for Peace, has been conducted since 1997 by UNESCO Artist for Peace Valery Gergiev and in 2018 welcomed Sir Donald Runnicles and Sir Karl Jenkins as guest conductors for three concerts marking the centenary of the WW1 Armistice. It comes together on special occasions to promote peace and to celebrate reconstruction and remembrance after conflict.
Concerts for peace have been given in Geneva, Baden-Baden, London at the BBC Proms, St. Petersburg, Moscow, Berlin, Beijing, Rotterdam, Brussels, Budapest, Jerusalem, Krakow, Stockholm, Abu-Dhabi, Salzburg, New York, Chicago and many other cities.

UNESCO Artist for Peace with UNESCO 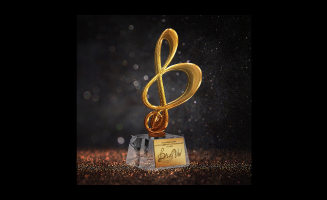 25 years of services to music, education and peace

The seed of the idea which became the World Orchestra for Peace was sown in Solti's mind, as he said: "Isn't it amazing that we musicians can unite the world...why can't the politicians do it?"

The smile said it all - Solti's delight at the end of a brilliant performance by his new World Orchestra for Peace of the first piece, Rossini's William Tell overture. As he commented in the interval "I think no orchestra could play that work better....."

Charles Kaye hands the baton to the new conductor of the World Orchestra for Peace, Valery Gergiev.

27th August 2005: 1st concert at the BBC Proms, London of the WOP/Credit SuisseTour to Berlin, Moscow, Beijing marking 60 years since the signing of the peace treaty which ended WW2.

Valery Gergiev remarked in the broadcast interval feature film: "If the world would take its collected wealth - and distribute it in the same way this Orchestra distributes its collective talent - we would live in somewhere undescribably beautiful..."

5th August 2010: Irina Bokova, Director-General of UNESCO, makes the presentation of the designation UNESCO Artist for Peace to Charles Kaye and the World Orchestra for Peace in the presence of Valery Gergiev at London's Royal Albert Hall.

August 2010: Letter from His Royal Highness, the Prince of Wales for the concert programmes of the two concerts held in London and Salzburg, celebrating the 150th anniversaries of the birth of Gustav Mahler and the 90th anniversary of the founding of the Salzburg Festival as a peace offering after WW1.

Three years after their concert in Jerusalem, Gergiev and the Orchestra gave their first concert in the Arab world, with performances of works by Rossini, Prokofiev and Tschaikovsky - and a sparkly Johann Strauss New Year's greeting from Vienna! (watch/listen here).

A celebratory tribute by the World Orchestra for Peace and Valery Gergiev, presented by Lady Solti, with solo contributions from René Pape and Angela Gheorghiu (both artists given important chances by Sir Georg at the start of their international careers) and members of the Solti Accademia (conducted by Solti Foundation US conductor award laureate Christian Macelaru). Programme details and short extract here.

20th July 2014 : The UNESCO Concert for Peace at the BBC Proms, London

Marking the 100th anniversary of the start of WW1, the World Orchestra for Peace and Valery Gergiev performed Strauss's Symphonic Fantasia Die Frau ohne Schatten, Roxanna Panufnik's Three Paths to Peace and Mahler's monumental 6th Symphony before a packed Royal Albert Hall. The Strauss and the moving documentary From War to Peace can be viewed here.