Naomi Kawase, filmmaker and artist, has been designated UNESCO Goodwill Ambassador in 2021, in light of her commitment to promoting the Cultural and Creative Industries as a lever for building more just societies, including for girls and women.

Born and raised in Nara (Japan), Naomi Kawase continues to make her films in her hometown and organizes the biennial Nara International Film Festival dedicated to the promotion of young cinematographic creation. Her first feature film, Suzaku, won the Camera D’Or at the Cannes Film Festival in 1997,

making her the first Japanese and youngest person to win this Prize. She won the Cannes Grand Prize in 2007 for The Mourning Forest and became a Jury Member for the 66th edition Cannes Film Festival in 2013. Her latest film, True Mothers, released in 2020, tells the story of an adoption and addresses the issues of motherhood. It was included in the official selection of the 73rd Cannes Film Festival. In 2015, she was designated Chevalier in the French Ordre des Arts et des Letters.

She is the official Film Director for the Tokyo 2020 Olympic Games and serves as the Thematic Producer for the upcoming 2025 World Expo in Kansai-Osaka, Japan. She is the President of the Women’s Japanese Basketball League. 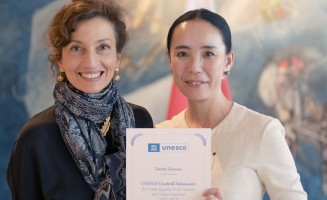