President of the 40th session of the General Conference 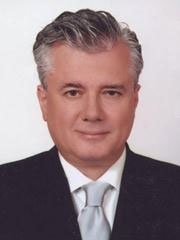 Ambassador Altay Cengizer was born in Istanbul in 1954. He entered the Ministry of Foreign Affairs in 1979 and served in various capacities at home and abroad.

Between 2001 and 2005, he was Deputy Permanent Delegate of Turkey to the UN in New York, and la ter appointed as Ambassador to Tajikistan where he served between 2005 and 2006. He was Ambassador in Dublin from 2009 to 2013. He has been serving as Turkey's Permanent Representative to UNESCO since 31 October 2016.

Ambassador Altay Cengizer is a graduate of Bosphorus University, and has an M.A. degree in International History from the LSE and a diploma on Crisis Management and Conflict Resolution from Columbia University. Between 2007 and 2009 he was a member of the Weatherhead Center for International Affairs, Harvard University. He speaks English and French. He is married and has three daughters.

At the opening of the 40th session of the UNESCO General Conference on 12 November 2019, Ambassador Altay Cengizer was elected President of the General Conference. In this capacity, he also chairs the Working Group on governance, procedures and working methods of the Governing Bodies of UNESCO for the biennium 2020-2021.

Working Group on governance, procedures and working methods of the Governing Bodies of UNESCO

General powers of the President

The President shall declare the opening and closing of each plenary meeting of the Conference. He/She shall direct the discussions, ensure observance of these Rules, accord the right to speak, put questions to the vote and announce decisions. He/She shall rule on points of order and, subject to the present Rules, shall control the proceedings and the maintenance of order. The President may, in the course of the discussion of an item, propose to the Conference the limitation of the time to be allowed to speakers, the limitation of the number of times each speaker may speak, the closure of the list of speakers or the closure of the debate. He/She may also propose the suspension or adjournment of the meeting or the adjournment of the debate on the item under discussion.

The President shall not vote, but may designate a member of his/her delegation to vote in his/her place.

The President, in the exercise of his/her functions, remains under the authority of the General Conference.

The President of the General Conference shall sit ex officio in an advisory capacity on the Executive Board.

List of the Former Presidents of the General Conference