The activities on the safeguarding and development of traditional craftsmanship of the Kashkadarya region will be held in Karshi and Kasbi (Uzbekistan) from 10 to 22 July 2019. It is organized by the UNESCO Office in Tashkent, the Governor’s office of the Kashkadarya Province and the Munisipality of Karshi, the Khunarmand Association of Craftspeople and Folk Artists of the Republic of Uzbekistan, and the Ministry of Culture of the Republic of Uzbekistan.

The main purpose of the events is to safeguard and promote the intangible cultural heritage of the Kashkadarya region, as well as to support the development of traditional craftsmanship in the region through the improvement of their quality and design. Moreover, the activities aim to improve the economic and social wellbeing of the population through the development of the entrepreneurial skills of craftspeople, especially among young people and women.

The programme of activities includes a round table entitled " Silk Roads Heritage Corridors: Safeguarding and Transmission of Intangible Cultural Heritage for the Sustainable Development of the Regions of Uzbekistan". Additionally, an exhibition of traditional crafts of Kashkadarya region, as well as a series of practical trainings on traditional craftsmanship (carpet weaving, embroidery and ceramics) and handicraft entrepreneurship will be held in Karshi and Kasbi. During the activities, it is expected that the recommendations for the safeguarding and further development of traditional craftmenship in the Kashkadarya region will be developed.

The programme of practical trainings includes lectures on the history and current state of Kashkadarya crafts, as well as practical classes on embroidery, carpet weaving and ceramics, which will be conducted by leading scholars, researchers of traditional craftpeople of Uzbekistan.

The activities are implemented within the framework of the UNESCO/EU partnership project "Silk Roads Heritage Corridors in Afghanistan, Central Asia and Iran – International Dimension of the European Year of Cultural Heritage". The aim of the project is to:

The launch ceremonies will be opened by Mr. Ruziev Zafar, the Governor of Kashkadarya province, Mr. Fuad Pashayev, the Head of UNESCO Office in Tashkent, a.i., Mr Francois Begeot, Head of the Department for Cooperation of the European Union Delegation to Uzbekistan, Mr. Akobir Khakimov, Deputy Chairman of Khunarmand Association, Ms. Shahlo Abdullayeva, Head of Museum Development Department of the Ministry of Culture of the Republic of Uzbekistan. 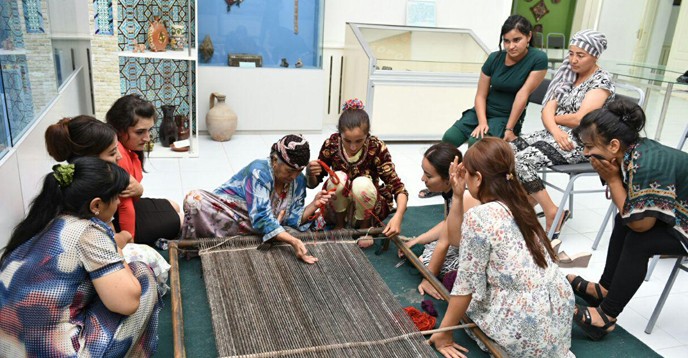