The focus on impunity of this resolution stems from the worrying situation that over the past decade, more than 800 journalists have been killed for bringing news and information to the public. In 2015 alone, the UNESCO Director-General condemned the killing of 115 journalists, media workers, and social media producers of public interest journalism. In 2012, the deadliest year for journalists, 123 cases were condemned.

On November 17 this year, the 39 Member States of UNESCO’s Intergovernmental Council of the International Programme for Development of Communication (IPDC) will receive the biennial report of the UNESCO Director-General on the Safety of Journalists and the Danger of Impunity. The report provides an overview of killings of journalists condemned by UNESCO’s Director-General on 2014-2015, i.e. 98 in 2014 and 115 in 2015. The report also includes recent information from Member States as received by the Director-General regarding the current state of judiciary investigations about killings committed between 2006 and 2015.

According to the 2016 UNESCO Director-General’s Report on the Safety of Journalists and the Danger of Impunity, eight per cent of the 827 cases of killings of journalists from 2006-2015 have been reported as resolved. Forty percent of the cases are considered as “ongoing”, meaning that either a police or judicial enquiry is reportedly still underway, or the cases have been archived or deemed to be unresolved. In 51 percent of the cases, either no information was received or the Member State in whose jurisdiction the killing occurred sent only an acknowledgment of receiving the Director-General’s request.

Significantly, the Finlandia Declaration of the 2016 World Press Freedom Day conference held at Helsinki in Finland acknowledges “that violations of press freedom also have an adverse impact on the right to information, including by the arbitrary blocking of access to online information, restricting expression online, and arbitrarily intruding on digital privacy, as well as the killing, kidnapping, enforced disappearance, arbitrary detention, torture, deportations and other violations of journalists, associated media personnel, trade unionists and human rights advocates.” In particular, it called on journalists, civil societies and internet intermediaries to “promote the safety of newsrooms and journalists online and offline through training, ICT applications, safety protocols and systems, as well the importance of confidentiality of journalistic sources in the digital age.” 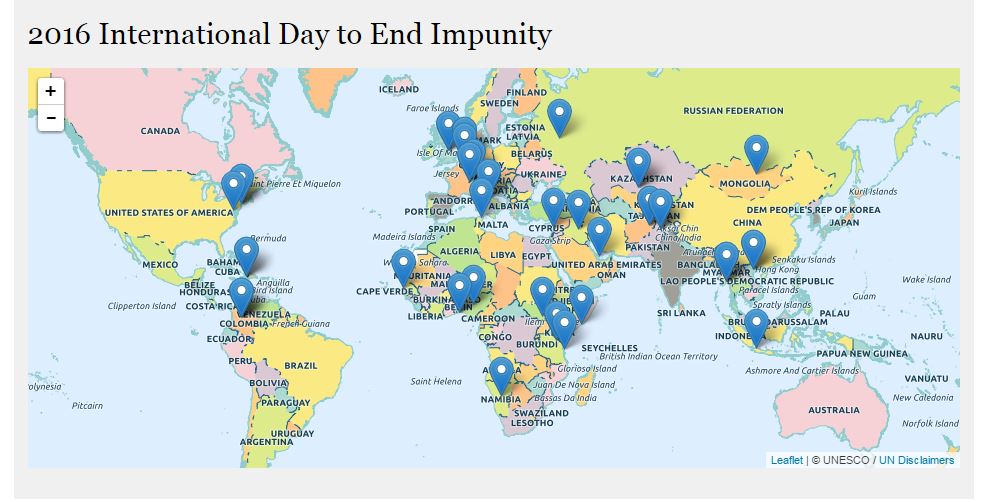