In 2018, the City of Bogota recorded 28,046 companies in the creative and cultural industries, of which 29.2% were headed by women. These are some figures from study conducted by Yanhaas, from October 2017 to February 2018, under the supervision of the Bogotá Chamber of Commerce (BCC).

In December 2016, the Bogotá Chamber of Commerce received a grant of 99,987 USD through the International Fund for Cultural Diversity (IFCD) for the project “Cartography and capacity building for cultural industries in Bogotá”.

The survey, whose goal was to capture the state of the cultural and creative industries in the Colombian capital, received 11.374 responses. This study revealed that 51% of the enterprises that participated in the survey were established less than five years ago, and only 10% have existed for twenty years or more. These figures demonstrate that the notion of the cultural and creative industries is still new. Of these companies, 31.7% were registered as “Simplified Joint Stock Companies” (Société par actions simplifiée - SAS) and 29,8% are registered under an individual, registered as a business owner.

The results of this study were published and presented at the Bogota Book Fair in April 2019. "This study presents new information that helps district governments make decisions on issues related to entrepreneurship. It also contributes to the formulation of public cultural policy and the creative economy as well as its action plan currently being developed,” explained Adriana Padilla, director of cultural and creative industries at the Bogotá Chamber of Commerce (BCC).

During this survey, the BCC also found that 64.5% of the managers have received no formal managerial training. In response, the BCC implemented 17 training programs in the field of performing arts, visual arts and publishing. 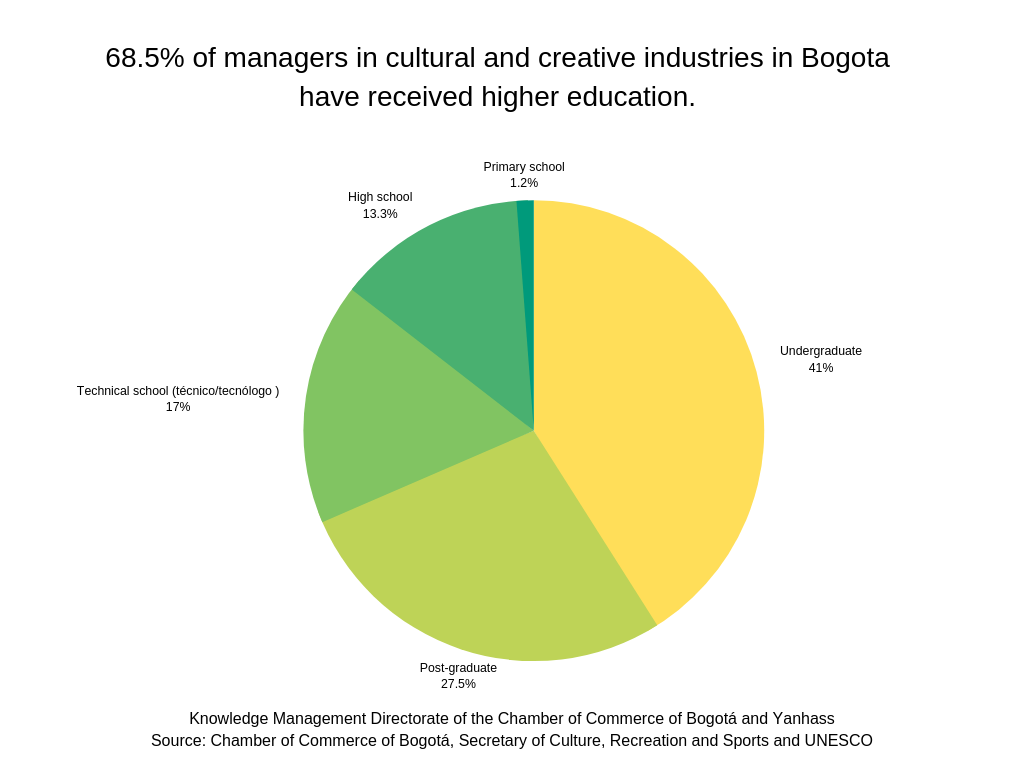 As many as 152 cultural entrepreneurs took part in these trainings, which allowed them to strengthen their knowledge on the professionalization of the creative industry and to understand the value chain of the creative economy. With the collaboration of partners such as Camara Colombiana del Libro, IDARTES and the Ministry of Culture in Colombia, various themes have been identified including artistic direction, art market, performing arts production, festivals, financial management in culture, Colombian legislation concerning the sector, the economic model of culture and art, and arts marketing and digital marketing, among others.

The trainings were beneficial to the entrepreneurs: "The training covered various subjects, and it was great to learn ways to develop our business as a professional. It also gave us the guidelines to strengthen our business models. It was also a good place to get to know artists, managers and agents in the field of arts”, said Juan Carlos Garzon Urrego. One of the major objectives of this project was to strengthen the creative economy by giving the necessary tools for each creator to register themselves as well as their businesses. At the end of the training, 83% of the participants in the visual arts were able to define their strategy. Three performing arts companies have been able to negotiate their participation in the Iberoamericano de Teatro Festival.

This project, above all, changed the perspective of certain disciplines such as the performing arts who did not consider themselves as an industry player. When the project ended in October 2018, the BCC also noticed a growth in the registration by various cultural actors - a positive development for Colombia’s development strategy, where creative economy is firmly placed as the engine for the country’s sustainable growth, better known as “"Orange economy”.

Cartography and capacity building for cultural industries in Bogotá